One week after being informed that he will not return to the #00 Michael Waltrip Racing Toyota next season, driver David Reutimann said he remains confused and hurt by his firing. 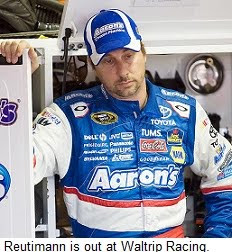 “We knew the season had been pretty bad, and we weren’t very excited about that,” said Reutimann on Sirius XM NASCAR Radio’s Sirius Speedway with Dave Moody. “But we had some things in the works for next year, and I really felt like 2012 was going to be better for us. Now, it doesn’t look like that opportunity is going to be there.”

MWR announced last week that they will replace Reutimann with veteran Mark Martin in 25 NASCAR Sprint Cup Series races next season, with team owner Michael Waltrip and an unnamed third driver splitting the balance of the schedule in the #00 Aaron’s Dream Machine Toyota. Reutimann said he was attending the SEMA Trade Show in Las Vegas last week when he received a call from Waltrip informing him of his release. “I was in the lobby of the hotel last Tuesday morning, waiting for my ride to the show when I got a call from Michael. He said there there was an article out somewhere (in the media) talking about me not coming back next year, and that we needed to talk. I’m not sure when he had planned on telling me, but I think (the story) forced the issue a bit. It sped up the process of him actually telling me what was going to happen.”

The third-generation driver insisted he had no prior indication that his job was in jeopardy. “I hadn’t been told anything,” he said. “I had asked around a little bit, and felt like we were all pretty clear about the direction we were going to go (in 2012). It certainly didn’t involve me getting fired. I didn’t have any indication that’s how things were going to happen.”

Waltrip has claimed the move was made at the behest of Aaron’s CEO Ken Butler, who “picked a future Hall of Famer to drive the Aaron's Dream Machine." Reutimann said he is still unsure what happened to force his release, saying, “Michael and I haven’t caught up to talk about what actually happened. All I have to go on at this point is what he has said publically. I’m sure I’ll talk with Michael at some point. He has actually reached out to have that happen, but we haven’t found the right time to do it.

“At this point, though, I don’t know that it really matters. I don’t know when (MWR) had planned on telling me, but maybe it’s better now, with a couple of weeks left to talk to people. They could have waited until after Homestead and said, `Oh, by the way, grab your stuff and leave.’” 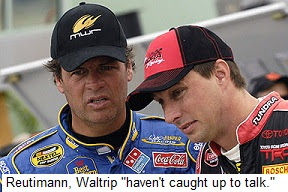 Reutimann said his firing and the reality of finishing the 2011 season as a lame-duck driver have been difficult to accept. “It’s hard,” he said. “I’m a pretty emotional guy to begin with, and there are guys on that team that have been with me since the Truck Series. There are guys who left other organizations to come work with me on the #00 team. That’s a great group of guys.

“I feel like I have played at least a small part in helping to build MWR,” he said, “They gave me an opportunity and I appreciate that, along with the opportunity Aaron’s gave me. But I also feel like I’ve done a pretty good job of trying to help build the organization and be a guy they could rely on. That’s why it’s difficult at the end of the day to put this in perspective and not be hurt by it.

“I know people say, `It’s just business,’” said Reutimann. “But that’s nothing but a catch-all to try and make you feel better. It doesn’t really work, at least from my end. At the end of the day, it all comes down to, `You’re not needed anymore. Thanks for everything, but we’ve got a different direction we’re going in.’

“It’s only business when it isn’t happening to you,” he said. “When you’re the guy in the middle of it, it doesn’t feel like business. It feels awfully personal.” 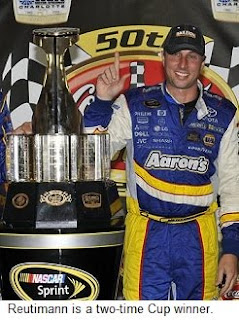 Reutimann said he is determined to finish his tenure at MWR on a high note. “These last two weeks are not going to be easy, but it’s still my sponsor and my team until the checkered flag waves at Homestead. I am going to go out there and do the best I can to try and win races. I’m going to go out the best way I possibly can.”

Asked if he feels any animosity toward the man who will replace him next season, Reutimann said, “I don’t really know. Mark had to do what he had to do, and that’s the end of the story. You can’t blame a guy for taking a great opportunity, evidently, and as long as he feels okay with it, everyone should be able to move on with it and go forward.”

The Florida native said has no idea what his future holds, but hopes to catch on with another NASCAR team. “Just being notified last week, I haven’t had much of an opportunity to talk with anybody,” he said. “Right now, it’s too early to tell. I’ve had a conversation or two with different people, and a couple of folks have called to see what was going on. But there’s nothing that would put me in any kind of seat next year. There are a lot of rumors out there about me going here, there and everywhere, but I haven’t crossed that bridge with anybody.

“I wish things hadn’t gone down the way they did,” said Reutimann. “But now, it’s time to focus on something different and figure out what I’m going to do with the rest of my life.”
Posted by Dave Moody at 10:09 AM