Reutimann Out At MWR, Martin Set To Replace? 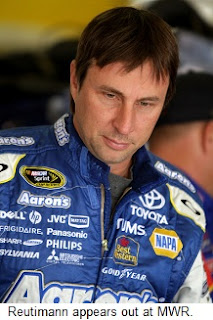 Sirius XM NASCAR Radio’s Sirius Speedway with Dave Moody has learned that David Reutimann will not return to the #00 Toyota at Michael Waltrip Racing next season, and could be replaced on at least a part-time basis by veteran Mark Martin.

Sources close to the team say Reutimann was informed by team owner Michael Waltrip today that he will not be retained after a 2011 season that has produced just one Top-5 and two Top-10 finishes. The highlight of his season came when he won the pole at Richmond in early September, and he currently stands 25th in championship points. Reutimann is attending the SEMA show in Las Vegas today, and was unavailable for comment. 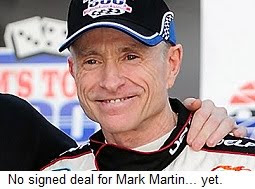 Both the Charlotte Observer and Associated Press are reporting that Martin will replace Reutimann in the #00 Toyota for at least a limited schedule of races next season, but Martin’s business manager, Benny Ertel, told Sirius Speedway that Martin has no signed deals in place for next year; with MWR or anyone else. “We’ve had conversations with probably 15 teams,” said Ertel. “We’re working very, very hard to find something for next year, but we do not have a done deal with anyone at present. We’re talking to a lot of people, we’ve had conversations with half the garage, in all three divisions.” He conceded that MWR is one of the operations with whom Martin has spoken.

“Stewart Haas has a press conference at noon today,” said Ertel. “Michael Waltrip has one Friday in Texas. We’d love to be part of either of those announcements, but at this moment, we do not have a done deal.”

He said he is optimistic that Martin will find a new ride for 2012, joking, “I’m just happy I won’t be back bartending next year.”

There is no word on whether Reutimann will finish the season with MWR.
Posted by Dave Moody at 12:16 PM