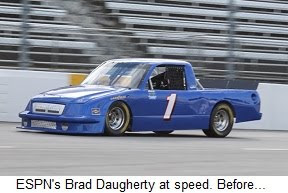 MARTINSVILLE, Va. – Brad Daugherty has watched lots of races at Martinsville Speedway as a fan, car owner and TV analyst for ESPN. After last month’s TUMS Fast Relief 500, he knew he had to turn some laps himself on the historic oval.

That’s what he did most of Wednesday, run laps at Martinsville Speedway, in a race truck, specially modified to allow plenty of room for his 7-foot-1 frame. The former NBA All-Star recorded some pretty good times, too, clocking in laps of under 22 seconds, which is within shouting distance of the qualifying speed for a NASCAR Craftsman Truck Series race at Martinsville.

“This is a great track. I think the biggest thing for Andy Petree (former Sprint Cup Series championship crew chief and fellow ESPN analyst) and I was the last race here,” said Daugherty, explaining why he picked Martinsville to test.

“I thought it (TUMS Fast Relief 500) was the best race we had all year, including the Homestead race, which was great … watching Carl and Tony battle. But that race we had here was just the best we had all season long. And when we left here, Andy was like, ‘we got to bring our stuff back here and runs some laps.’ This place is just cool.”

Petree, who has actually run a couple of NASCAR Camping World Truck Series races at Martinsville, was back behind the wheel in his own truck Wednesday, helping show Daugherty the ropes. Not that he needed a lot of help. He’s been involved in racing since he was a teenager and driven in several different divisions over the years. 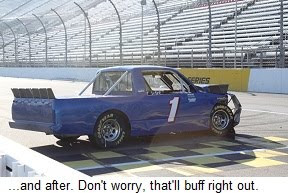 “I’ve been racing a little here and there, at Hickory and at Myrtle Beach. Probably over the last eight or nine years, I’ve raced more and more,” said Daugherty, a former All-American at the University of North Carolina. “I’ve raced for quite a while, but I’ve always just dabbled. I’ve never been able to do a lot because of basketball and the TV work I do.”

Daugherty plans on running much of the National Auto Sport Association Southeastern Regional schedule in a truck next season. That’s the reason he built the truck he had at Martinsville, one with an interior designed for his size.

“We took the oil cooler out from behind the seat and moved it up to the right front corner of the truck and moved the seat and cab back about 14 inches,” said Daugherty, who will have to do a little offseason work on the truck after scrubbing the wall late in Wednesday’s test. “It’s the first time I’ve ever had this much room in anything I’ve raced.”

Racing returns to Martinsville Speedway with the Kroger 250 NASCAR Camping World Truck Series race on March 31 and the Goody’s Fast Relief 500 on April 1. Tickets are on sale and may be purchased by calling 877.RACE.TIX or online at www.martinsvillespeedway.com.

(Thanks to Ken Childs for the photos.)
Posted by Dave Moody at 6:04 PM