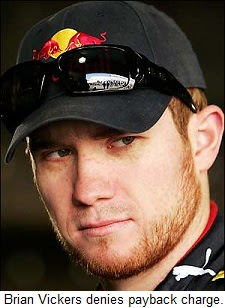 Brian Vickers’ feud with Matt Kenseth shows no sign of abating this week, after Vickers pushed Kenseth into the Turn Three wall Sunday at Phoenix International Raceway. The crash, which caused major damage to Kenseth’s Crown Royal Ford, was the latest in a series of run-ins between the two dating back to Martinsville Speedway three weeks ago.

An angry Kenseth said the wreck was a clear case of retribution. "Obviously, it is retaliation for retaliation,'' said Kenseth, as his Roush Fenway Racing crew scrambled to repair severe radiator, suspension and body damage. “I saw (Vickers) coming and lifted at least 10 car lengths before where I normally would lift. He drove in there at 165 miles per hour and cleaned us out. It was so premeditated.”

The former Sprint Cup Series champion called upon NASCAR to sanction Vickers, saying, “It surprises me that they didn't do anything. I am disappointed, but I expected it.'' He also compared Sunday’s incident to the recent crash between Kyle Busch and Ron Hornaday, Jr., that resulted in Busch being parked for two races, fined $50,000 and placed on NASCAR suspension for the remainder of the year. "If NASCAR is going to start parking people for being mad 25 seconds after you wreck and wrecking somebody, then you would park somebody for (what happened today,” he said. 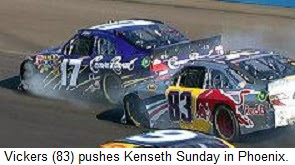 Kenseth claimed that Vickers has talked openly in the garage about crashing him in retaliation for their Martinsville incidents, a charge Vickers denied. "He wrecked me at Martinsville (and) he got wrecked here, but it actually wasn't (payback),” insisted Vickers. “I'm not saying I wasn't going to pay him back, but I'm just saying that wasn't it. If he wants to doubt us, that's fine."