Mayfield "Unaware" Of Drugs, Stolen Property At His Home 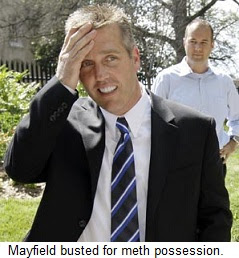 The attorney for former NASCAR driver Jeremy Mayfield says his client was unaware of more than $100,000 in stolen property found in an out-building and storage trailers on his property earlier this week, or of approximately 1.5 grams of methamphetamine discovered in a safe in his home.

Attorney Daniel Marino released a written statement late Tuesday saying Mayfield “has no knowledge of either stolen property or methamphetamine being present on his property.” Further, he said his client, “denies the accusation that he was in possession of methamphetamine or any other illegal drug and denies any suggestion that he knowingly received or possessed stolen property." He said the search by Catawba County (NC) Sherriff’s Deputies “was prompted by… baseless allegations by an unreliable source." He said Mayfield is cooperating with authorities and looks forward to seeing the matter resolved quickly.

The Lincoln County (NC) Sheriff's Office told WSOC-TV in Charlotte that a "large amount" of stolen property was recovered in the raid on Mayfield's residence, including truck parts, an engraving machine and electric motor controllers stolen from a trucking company in nearby Lincolnton, as well as heavy equipment parts, scrap metal, welders and welding accessories belonging to a local paving and excavating company. Total value of the stolen goods reportedly exceeds $100,000, and officials are expected to file additional charges against Mayfield in the coming days.

NASCAR commented briefly on Mayfield’s arrest, saying, “Having just heard and read the news about the Jeremy Mayfield incident, we will have to see how the facts play out. NASCAR's goal in its Substance Abuse program has always been to keep competitors safe and create treatment opportunities for those who need it."

Mayfield is scheduled to appear in court on Nov. 14. Until then, his attorney said he “asks that the public reserve its judgment on this matter."
Posted by Dave Moody at 12:53 PM