Edwards and Stewart Escalate The Rhetoric 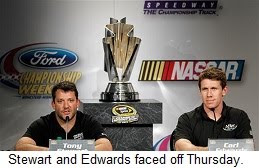 If NASCAR Sprint Cup Series championship contenders Carl Edwards and Tony Stewart trade half as much paint Sunday as they did in Thursday's Champion's Press Conference, it’s going to be one heck of a show.

Both drivers were at their verbal and intellectual best Thursday, sparring, jousting and good-natured firebombs at each other prior to Sunday’s decisive Ford 400 at Homestead-Miami Speedway. There has been a bit of trash-talking during this year’s Chase, most of it directed by Stewart at Edwards, the Sprint Cup Series point leader. Both drivers ratcheted up the rhetoric to a new level Thursday, however. Asked if he might take the gloves off and resort to a little “Boys Have At It” in the final laps Sunday, Stewart quipped, “I’d wreck my mom to win a championship. I’d wreck your mom to win a championship. I respect (Carl) as a driver, but this isn’t about friendship. This is war. This is battle. This is for a national championship. It’s no-holds barred. I didn’t come this far to be one step away from it and let it slip away. We’re going to go for it.’’

“I’ve listened to you talk a lot today," said Edwards with a smile. "You’ve talked a lot about your past successes (and) that is very respectable. And… that will make it more fun if we’re able to beat you. It will make me more proud.’’ Edwards’ jab triggered a series of exchanges between the two that revealed a great deal about their emotional state heading into the final race of the season.

"It’s like Kid Rock said,” replied Stewart of his trash-talk. “It’s not cocky if you can back it up (and) I think we’ve been backing it up the last three weeks.’’

"Did you say something" asked Edwards, feigning disinterest. “(You’ve) got the talking part figured out. The problem is, you haven't led the points yet this year, have you?" 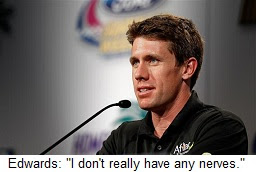 The former Series champion downplayed Edwards’ three-point championship lead,” saying, "We're not trying to overcome a big deficit. We're right there, right behind him. We can finish 43rd this weekend and not be any worse off than we are right now. We don't have anything to lose. We can throw everything we’ve got at it (and) if we make a mistake, it doesn't cost anything. There's no penalty for us screwing up."

Edwards said he likes his chances of hoisting the Sprint Cup late Sunday afternoon and feels no pressure. "I don't really have any nerves," he said. "We've been running well (and) earned our spot at the top of the standings. I'm excited to have this opportunity to go out and win this championship.” He cited his past record at Homestead – which includes two wins, four Top-5 and six Top-10 finishes in seven career starts -- as the leading factor in his pre-race confidence.

“We couldn't feel better about the racetrack,” he said. “We feel really good about the race. I'm looking forward to going out there and racing the car." 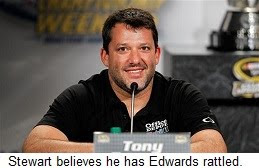 Both drivers claim to have studied the other’s style in recent weeks, finding critical areas to exploit. "I've learned a lot about Tony, by the way he competes and what he's said,” said Edwards. “I've paid attention to what he says. I pay attention to the way he looks when he gets out of the race car, the body language he uses, things like that. I've learned a lot."

Stewart said he has been observing Edwards, as well, and believes he has the point leader rattled. "I think he's doing a pretty good acting job,” said the Mobil 1/Office Depot Chevrolet driver. “I think he's a lot more nervous than he lets on. He's got a lot of class and character and is a strong person. But I don't think he's as strong as he wants to lead everyone to believe."

As entertaining as yesterday’s duel was, the time for talk is nearly over. Both Edwards and Stewart will take to the track later today and begin the critical process of fine-tuning their mounts for the most importance race of their season, and possibly their lives.

Fasten your seatbelts, it’s going to be a bumpy ride.
Posted by Dave Moody at 9:35 AM