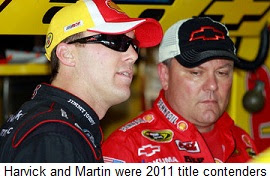 Longtime Richard Childress Racing crew chiefs Shane Wilson and Gil Martin have taken new assignments with the team for 2012. Wilson has been named crew chief of the No. 29 Budweiser/Rheem/Jimmy John’s Sprint Cup Series Chevrolet and driver Kevin Harvick. Wilson spent the last three seasons in the same position with RCR’s No. 33 Cheerios/Hamburger Helper team. Martin will assume the role of Director of Team Operations, after serving as Harvick's crew chief since May of 2009.

Team owner Richard Childress said the change came at the request of Harvick.
“Kevin came to me after the Phoenix race a couple weeks ago and asked for a change in the leadership of his team for the 2012 season,” he said. “The expectations at RCR are to win championships, so the decision was made to move Shane Wilson to the No. 29 Budweiser/Rheem/Jimmy Johns program. Shane did a great job for RCR in the Nationwide Series when he first got here, and built on that success the past three seasons with our No. 33 Cheerios/Hamburger Helper team. We feel he will continue do a great job with the No. 29 team.”

Wilson and Harvick worked together in 2006, winning 10 races and recording 24 Top-5 and 31 Top-10 finishes en route to that season’s NASCAR Nationwide Series championship. The team’s 824-point margin of victory is a series record. 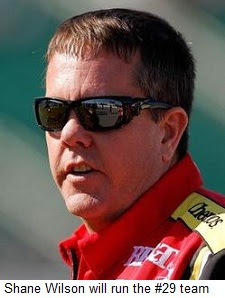 “Shane is a good friend of mine and we had a lot of success together in the NASCAR Nationwide Series,” said Harvick. “He has a lot of experience now in the Sprint Cup Series and I look forward to working with him again.”

Further personnel changes within RCR’s competition department will be announced in the coming weeks.
Posted by Dave Moody at 10:44 AM