Stewart Wins One For The Ages 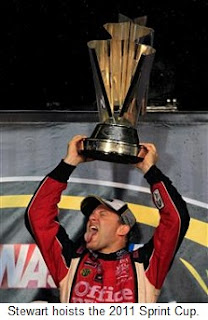 After laboring through the 26-race regular season, Stewart limped into the 2011 Chase for the NASCAR Sprint Cup as the ninth of 12 championship contenders. He was winless on the year and – by his own admission -- an afterthought for the 2011 title. But once the Chase began, Stewart shed his regular-season mediocrity like Clark Kent sheds suit, tie and eyeglasses, winning five of the final 10 races en route to an unlikely and unforgettable championship triumph.

Sunday’s Homestead finale was one for the record books. After dropping to 40th place with damage caused by debris from Kurt Busch’s shattered transmission, Stewart began slashing his way back into title contention with a fury that cemented his spot – once and for all – as one of the greatest pure wheelmen in the 64-year history of NASCAR. He ran down fellow championship contender Carl Edwards, passed him and held his Roush Fenway Racing Ford at bay over the final 35 laps to claim his fifth victory in 10 Chase starts; a win that left him tied with Edwards for the series championship. Those five victories – to Edwards’ one – gave Stewart the decisive tiebreaker, allowing him to claim the championship trophy.

"If this doesn't go down as one of the greatest championship battles in history, I don't know what will," said Stewart in Victory Lane Sunday. The title was the third of his NASCAR career, putting him in the company of NASCAR legends Lee Petty, David Pearson, Cale Yarborough and Darrell Waltrip. It virtually guaranteed him first-ballot admission to the Hall Of Fame, and set a standard of playoff excellence that likely will never be eclipsed.

Not bad for a guy who a few weeks ago proclaimed, "If we're going to run this bad, it really doesn't matter whether we make the Chase or not." In fact, Stewart said that pre-Chase critique played a major role in turning the team around. "When I said we didn't belong in the Chase, there were two things that could have happened with our guys," he said. "They could have hung their heads and said, 'Our guy doesn't believe in us.' Or they could do exactly what they did. They never gave up. They fought like the Bad News Bears." 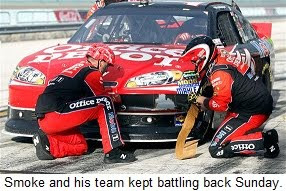 Stewart’s Mobil 1/Office Depot team hurdled a number of obstacles Sunday; obstacles that would have beaten a lesser team. They repaired early damage to the grille of their Chevrolet, overcame a slow pit stop caused by a jammed lug nut, and narrowly avoided running out of fuel after trying to stretch their fuel mileage to the limit in the late going.

"I was fully prepared for Tony to run out of fuel… have a tire problem, for anything to happen," said a crestfallen but gracious Edwards. "I drove it to the edge and beyond, and that's all I had."

In any other Chase – against any other opponent – Edwards’ 4.7 average finish would have been enough to prevail, with ease. But against Stewart, it was good for nothing more than a dead-heat tie for second best.

Damned impressive, indeed.
Posted by Dave Moody at 10:26 AM