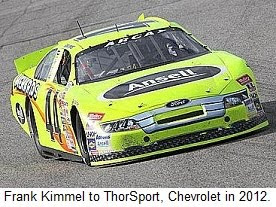 Kimmel will pilot the # 44 Ansell/Menards Chevrolet under the ThorSport Racing banner next season, and will also compete in the 2011 Camping World Truck Series season finale on Friday, Nov. 18, driving a Chevrolet Silverado out of the ThorSport stable at Homestead-Miami Speedway. Kimmel is a 73-time winner in ARCA competition, and captured the series championship in 1998, 2000, 2001, 2002, 2003, 2004, 2005, 2006 and 2007. He was also the 1992 ARCA Rookie of the Year, and has made 12 career starts in the Camping World Truck Series. He split with his family owned team at the end of this season, after finishing third in championship points behind youngsters Ty Dillon and Chris Buescher. He failed to win a race this season, finishing with three Top-5 and 17 Top-10 finishes in 19 starts.

ThorSport is the longest tenured team in the NASCAR Camping World Truck Series, making more than 500 starts since 1996. The team currently fields a trio of Truck Series Chevrolets for driver Johnny Sauter, Matt Crafton and Dakoda Armstrong.
Posted by Dave Moody at 2:07 PM