After a marathon series of negotiations between officials of Mars, Inc., and Joe Gibbs Racing, Kyle Busch will continue as driver of the #18 Joe Gibbs Racing NASCAR Sprint Cup Series Toyota. 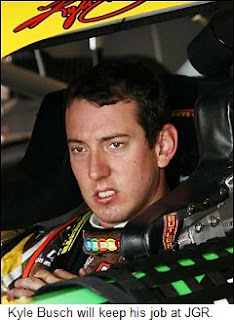 A statement released by Mars, Inc., late Thursday read, “Mars, Incorporated announced today that they will be removing Kyle Busch from driving the M&M’S car for the remaining two races of the 2011 NASCAR season as a result of the incident during last Friday’s NASCAR Camping World Truck Series race at Texas Motor Speedway. The car will not run with the M&M’S paint scheme until 2012, at which time Kyle Busch will be the driver with the expectation that no future incident take place.

“As a proud member of the racing community, Mars and the M&M’S® brand strongly support the partnership we have with Joe Gibbs Racing and are committed to NASCAR. Yet, Kyle’s recent actions are unacceptable and do not reflect the values of Mars,” said Debra A. Sandler, Chief Consumer Officer, Mars Chocolate North America. “While we do not condone Kyle’s recent actions, we do believe that he has shown remorse and has expressed a desire to change. We believe our decision will have a positive impact on Kyle and will help him return next season ready to win.”

M&MS will relinquish its role as primary sponsor for the final two races of the season, replaced by longtime JGR backer Interstate Batteries at Phoenix International and Homestead Miami Speedways. There had been speculation this week that Busch would not compete in the final two races of the season, and driver Aric Almirola confirmed that he was approached by JGR officials about replacing Busch at both Phoenix and Homestead.

Team owner Joe Gibbs said, ““We strongly support Mars’ decision. This gives us all time to work together to foster a positive change where Kyle can continue racing in a way we can all be proud of.”

It is unknown whether Busch will continue to drive JGR’s #18 NASCAR Nationwide Series Toyota. However, sponsor Z-Line Designs has asked the team to replace Busch with teammate Denny Hamlin in next week’s NASCAR Nationwide Series finale at Homestead Miami Speedway. Z-Line reacted negatively to last week’s Truck Series incident, saying, “We were disappointed in Kyle Busch's actions during the NASCAR Camping World Truck Series race last weekend at Texas Motor Speedway. As a sponsor, it is important that those who represent our company abide by certain standards of conduct. We have expressed our concerns directly to Kyle and to Joe Gibbs Racing. We support NASCAR’s decision and support Joe Gibbs Racing as they address this issue internally."
Posted by Dave Moody at 9:46 PM