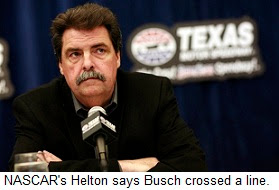 Helton defended NASCAR’s decision to sanction Busch in this freewheeling, “Boys Have At It” era, saying, "The responsibility that… we've given back to the drivers came with a very clear understanding that there could be a line that got crossed. I've made (comments) in the past about, 'We'll know it when we see it.' We saw it last night. After the event, a lot of folks put their heads together to decide what -- if anything --we would do. What I'm telling you today is our reaction."

Helton defended the sanctioning body’s recent reluctance to get involved in on-track incidents, saying, “The rarity of times we make a step like this speaks to the uniqueness and severity of the topic. We understand the ramifications… in making this type of move, but we also take our responsibility very seriously to maintain control of the event. At the end of the day, we're the ones who have to make that decision."

Helton said the severity of the incident was a key factor in NASCAR’s decision to suspend Busch, and that Hornaday’s status as a Camping World Truck Series championship contender “probably had a small impact on the reaction.” Busch’s past history also played a role, with Helton saying, “the accumulation of incidents around the driver; I won't sit here and tell you it's not an influence. But it's not an overriding influence."

Some fans are confused by NASCAR’s decision to sanction Busch while allowing similar incidents to go unpunished in the past, and Helton said the sanctioning body continues to fine-tune its policies, procedures and penalties. "It's natural in our sport to watch the evolution of a policy or a procedure, learn from it and possibly react differently,” he said. ”In the incident with Carl Edwards and Keselowski in Atlanta (in 2010), there was a reaction from us. There (were) points and there was money involved. The18 and the 29 at Darlington got a reaction from us. Today is the most severe reaction, but we felt like the circumstances came together to warrant the reaction we're talking about this morning.” 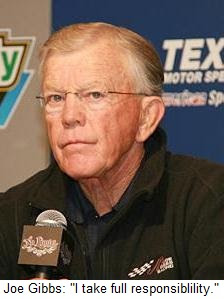 Ultimately, Busch may face sanctions more severe than those levied by NASCAR. Addressing the media this morning in Texas, team owner Joe Gibbs accepted blame for his driver’s actions, saying, “It definitely rests with me. When you own something… you’re responsible. I take full responsibility for it."

Gibbs hinted that conversations have taken place with team sponsors about how to proceed, and sources in the NASCAR garage say serious consideration is being given to parking Busch for the remainder of the 2011 Sprint Cup and Nationwide campaigns.

“Everybody here with our race team is trying to meet with everybody that was affected by this,” said Gibbs. “Obviously, we’ve got a lot of work to do there and a lot of people to see. But we’re going to be trying to go through this and handle everything in the right way.”

“This is a tough situation for us,” admitted Gibbs. “(With) other things that have happened in the past, we’ve tried to handle those things the right way. Certainly, that’s what we’re going to try to do with this.”
Posted by Dave Moody at 12:40 PM