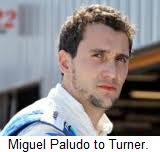 Paludo finished 17th in Truck Series points driving for Red Horse Racing this season, recording a career-high three Top-5 and seven Top-10 finishes. The 28-year old Brazilian made his mark racing go-karts at age 14, winning a regional championship in his home country. Paludo then headed to the national ranks, winning a pair Porsche GT3 Championships in 2006 and 2009.

Paludo made the move to stock cars in 2010, making nine K&N Pro Series East starts before jumping to the NCWTS in August of that year. Paludo made a statement in his first start, notching an impressive ninth-place finish at the high banks of Bristol Motor Speedway. He joins a stable of drivers at Turner Motorsports that includes James Buescher and Nelson Piquet, Jr. who will both contend for the 2012 NCWTS championship.

"I'm really excited to join Turner Motorsports next season," said Paludo. "I'm grateful to Mr. Turner for the opportunity he has given me to drive for the team and I'm looking forward to a strong season in 2012. I'm also thrilled to have some really strong teammates and I'm excited to see what we can do to make next season a good one for Turner Motorsports as we make a run for the championship."

In adding Paludo to the already strong line-up of talent, team owner Steve Turner affirmed his commitment to giving young drivers a platform on which to build their careers. "Miguel adds another dimension to our NASCAR Camping World Truck Series lineup," said Turner. "He has shown a significant amount of potential and is committed to making his mark in the NASCAR ranks. He is a proven champion winning titles in multiple disciplines. I am looking forward to a very competitive 2012 NASCAR Camping World Truck Series season and watching all of our entries run up front."
Posted by Dave Moody at 4:37 PM