Benson "Up To The Challenge" Of Truck Return 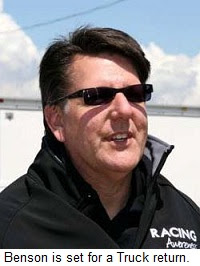 Johnny Benson left the NASCAR Camping World Truck Series at the top of his game. After winning the 2008 series championship in a spirited battle with Ron Hornaday, Jr., the Grand Rapids, Michigan native saw his Bill David Racing team shut down during the off season. Left without a full-time ride, he made only eight starts the following season for Red Horse Racing, and has started just five events since then.

It was not the way Benson wanted his NASCAR career to end, and now, the veteran driver is taking matters into his own hands. He recently announced plans to return to the Truck Series in 2012 with financing from his home state. “It’s not all the way done yet, but we’re working really hard and we’ve got a lot of good things going on,” said Benson. “I’m excited about the 2012 season, for sure.”

Major sponsorship for the effort will come from Pure Michigan, an organization devoted to publicizing tourism in the Great Lakes State. “They sponsored the `Pure Michigan 400’ at Michigan International Speedway recently,” said Benson, “and they’re excited about racing as a way to bring people to the state. They’re helping us talk to some other (Michigan-based) corporations, and we’re happy to have them be a part of this. We’ve already talked to a bunch of companies that want to get involved next season. It’s pretty exciting, and we’re working hard trying to get the whole package put together.”

Benson said he does not currently have sufficient sponsorship for the entire 2012 campaign. “We’ve got a partial season at the moment,” he said. “The goal is to find enough to run for the championship, but we’re not there yet. Once things get going, I’m confident that we’re going to be able to make it happen.”

He said he will team with Stacy Compton’s Turn One Racing to field Chevrolet Silverados in his return to the sport. “Stacy has put a lot of effort into this, and it’s going to be neat to work with a competitor I raced with for many years on the Nationwide and Truck Series. He’s a racer himself, and we’re trying to help each other and move this deal forward.” Benson said he had originally hoped to drive a Turn One Racing Chevrolet in last month’s Camping World Truck Series race at MIS, but was unable to get the deal done in time. There is still a chance that he and Compton will field a Truck in a race before the end of the 2011 season, but “the main focus is on next year, for sure.” 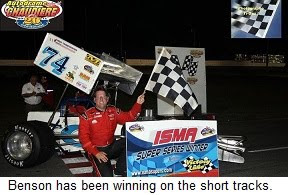 Benson said he has no doubt that the Truck Series is where he wants to be. “The diversity of the series is what makes it so great,” he said. “They’ve got some talented young kids, a lot of veteran guys who know what it takes to win championships and a whole bunch of guys in between. It’s always been great racing. In my opinion – and I’m obviously biased – I think it’s the best racing in NASCAR. I love running with the Truck Series. (Series Director) Wayne Auton and his staff do a tremendous job, and they deserve a lot of credit for the races they put on.”

He acknowledged that the face of the Truck Series is changing, with a new guard of talented young drivers at the top of the point standings, but added “There no doubt in my mind that if we get back to the Truck Series with a program that allows us to run for points, those kids are going to have some problems.

“I’m up for the challenge,” he said. “You’ve known me for a long time, and you know I’ll race anything, anytime. I’ve been running Supermodifieds and Super Late Models this summer, and that’s pretty challenging. I’m in great shape, and we’ve won races. I won a championship in the Truck Series, and under the right circumstances, I see no reason why I can’t do it again.”
Posted by Dave Moody at 10:38 AM