Sports Business Journal is reporting today that UPS will drastically reduce its sponsorship of the #6 Roush Fenway Racing Ford driven by David Ragan in 2012. The magazine cites "sources familiar with the company's plan" saying the shipping giant will trim its support of Ragan's #6 Ford from the full, 36 race schedule it underwrote this season to as few as four events (and a maximum of eight) in 2012.

Even though Ragan recorded his first career Sprint Cup Series victory earlier this year in the "Coke Zero 400" at Daytona, UPS has reportedly grown tired of being out-performed by rival FedEx, which backs Denny Hamlin's #11 Toyota at Joe Gibbs Racing. With just two races remaining until NASCAR sets the field for the 2012 Chase for the NASCAR Sprint Cup, Hamlin is currently 13th in points and holds the final Wildcard slot to the postseason. Ragan ranks 21st in the championship standings. 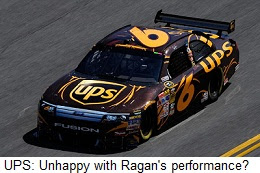 UPS is reportedly negotiating with Roush Fenway to drastically trim its level of involvement on Ragan's car, or move the sponsorship to the team's #99 Ford, driven by championship contender Carl Edwards. Team President Steve Newmark declined to comment to SBJ on the report, saying Roush Fenway is still in discussions with UPS.

UPS recently signed a new four-year, $100 million sponsorship deal with 68 college athletic programs. It is expected to renew its "Official Delivery Company of NASCAR" designation for 2012, whether or not it remains with Roush Fenway.