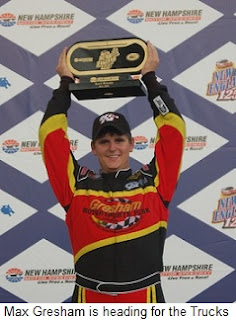 He is also scheduled to compete in the “Kroger 200” at Martinsville (VA) Speedway on October 29 and in the “Ford 200” at Homestead-Miami (FL) Speedway on November 18.
“I’m extremely excited to go to Turn One Racing and work with Stacy Compton and the whole group there for some races at the end of this season,” said Gresham. “It’s going to be a big step in my career and it’s great I can take it with them. This is going to be important for me because I will be able to get laps under my belt before hopefully moving into the Truck Series full-time in 2012.”

Gresham has posted two wins, eight Top-5 and 10 Top-10 finishes in 11 K&N Pro Series Easts tarts this season. The 18-year old Belmont Abbey College freshman has also claimed the pole in four races, and is the only driver to complete every one of the 1,553 laps run this season. He and his #18 Joe Gibbs Racing Toyota team have a 21-point lead in the championship standings heading to the Monster Mile this weekend.

Gresham, a native of Griffin, GA, began his career in the Bandolero division at Atlanta Motor Speedway at age eight, and has competed in 11 events on the ARCA Series presented by Menards over the past two seasons. He has one win, two poles and six Top-10 finishes in ARCA competition, driving for Venturini Motorsports.

“We’ve been talking to Max quite a bit this season,” said Compton of the move. “We’ve watched him race the past couple of years and felt like he and (current Turn One driver) Cole Whitt have as much talent or more than anyone coming through the sport. Chevrolet is really excited about working with a young talent like Max, too. These guys are the NASCAR stars of the future, and to have them in our stable now is really great.”
Posted by Dave Moody at 1:28 PM