Notes Left Over From a Rainy Race Weekend 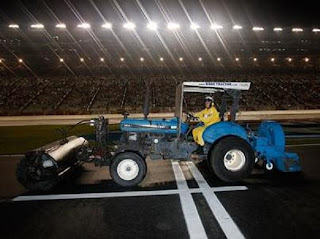 Long Night In Atlanta -- No one can ever accuse NASCAR of giving up easily. The sanctioning body waited until after 10 PM before pulling the plug on Sunday night's "Advocare 500" at Atlanta Motor Speedway; not long after a deluge soaked a track that had been almost completely dried.

If you went strictly by the radar Saturday night, firing up the jet dryers was a fool's errand. But NASCAR's been around long enough to understand that much of what shows up on the radar screen never makes it to the ground. They staked their hopes on a 2-3 hour "window" between storm cells and did their level best to make it work. Unfortunately, a small, pop-up cell materialized late in the going and drenched the track yet again.

Those who question NASCAR's refusal to knuckle-under to Mother Nature need only look back a few weeks to Pocono, when local meteorologists insisted there was absolutely no chance of completing a single lap of a three-day ARCA, Camping World Truck and Sprint Cup triple header. In fact, all three races ran as scheduled, in their entirety.

Bottom line, my friends? You've got to try.

Cashing In -- Saturday's Atlanta rain out also postponed an opportunity for Kyle Busch, Marcos Ambrose, Paul Menard and Brad Keselowski to win $3 million in the the finale of the "Sprint Summer Showdown." If one of the foursome is able to win Tuesday's "AdvoCare 500," he will pocket a cool million dollars for himself, another million for his chosen charity and a third million for a lucky fan. Keselowski won two of the five qualifying events for the "Sprint Summer Showdown," meaning that if he wins Tuesday, two fans will split the million-dollar bonus.

Good News And Bad News -- Canadian driver JR Fitzpatrick announced last week that he will no longer drive for Steve Meehan's fledgling GO Canada Racing NASCAR Nationwide Series team, concentrating -- for the time being, at least -- on his NASCAR Canadian Tire Series effort. Sources say Meehan underestimated the difficulty of attracting Canadian sponsorship to the team, but that Fitzpatrick's exit could clear the way for fellow Canucks Andrew Ranger and Jacques Villeneuve to fill the driver's seat in the #67 GO Canada entry.

Politics Out Of NASCAR -- This week's hubbub over four drivers declining invitations to a Wednesday White House reception strikes this writer as much ado about nothing. Some observers erroneously attempted to turn the issue into a partisan political event, implying that Carl Edwards, Kevin Harvick, Tony Stewart and Greg Biffle had declined to participate due to unhappiness with President Obama's politics and policies. It was, in fact, a simple case of poor scheduling.

Edwards said the issue was “blown a little bit out of proportion," pointing out that he serves on the President’s Council for Fitness Sports and Nutrition and stating emphatically that he meant no disrespect to the nation's Chief Executive. “This is not (just) the busiest time of the year," he said. "This is about the busiest time of my life. I spoke with the folks at the White House. They understand and the NASCAR folks understand. If something changes, then I’ll be there. But right now, I’m just not able to go."

Biffle said he was "disgusted by the comments," calling it "discouraging to see those comments from somebody who doesn't know the circumstance. I've got a picture of myself and (President Obama) in my office, right behind my desk, shaking hands at the White House. I've been there, I've done that and I respect that, (but) I'm obligated to be at a 3M function in Minnesota that they've had planned for nine months."

Trucks To The Rock -- Wednesday's press conference announcing the NASCAR Camping World Truck Series' return to Rockingham Speedway next season is one of the feel-good stories of the season to date. Nice guy Andy Hillenburg took a huge gamble a few years ago, purchasing the shuttered race track and dropping a ton of money in upkeep and repairs. He did so with no guarantee of ever getting back on the NASCAR National Series schedule, and while "The Rock" will almost certainly never host another Sprint Cup Series event, a Truck race there should be warmly embraced by drivers, teams and fans.

If you've ever complained about NASCAR taking grand old tracks like Rockingham out of the game, you owe it to yourself -- and the sport -- to be in the grandstands on Sunday afternoon, April 15. And bring a bunch of friends with you.

It'll be WAY more fun than working on your income taxes!

Rain Helps IndyCar -- NASCAR's weather woes in Atlanta were a boon for the IZOD IndyCar Series, which ran its first-ever race on the street course in Baltimore Sunday. With no NASCAR to watch -- other than an endless ESPN marathon of driver interviews, analysis and other rain-delay filler -- many gear heads migrated over to VERSUS for some Open Wheel action. Will Power won the race in front of a massive crowd/party. Street racing has never been this writer's personal cup of tea, and I can personally recall racing on go-kart tracks wider than Baltimore's street circuit. I did enjoy the full-course caution for a missing manhole cover, however. That's something we don't deal with very often in NASCAR.

Speaking Of IndyCar -- Danica Patrick clearly has her mind focused on her upcoming NASCAR career. After a lousy finish last week in Sonoma, Cal., Patrick vowed via Twitter to “redeem herself” for the poor outing. Interesting, she promised to do so in a car “with a hood.” She qualified a thoroughly unimpressive 26th in Baltimore, but eventually finished sixth by virtue of remaining crash-free while most of her fellow competitors could not.

Not That I Care, But -- Good luck to anyone browsing the IndyCar.com website in search of updated statistics. As of 1 PM ET today (Monday), there are no updated driver stats for the last TWO events; Sonoma or Baltimore! That's no way to run a railroad.
Posted by Dave Moody at 2:08 PM