Jimmie Johnson is not immune to stumbles during the Chase for the NASCAR Sprint Cup. In 2006, a crash in the Chase opener at New Hampshire Motor Speedway relegated the Lowes Chevrolet driver to a dismal, 39th place finish that left him ninth in the championship standings; a deficit he ultimately overcame en route to his first career Sprint Cup Series title.

This time around, however, Johnson has an even larger deficit to erase. 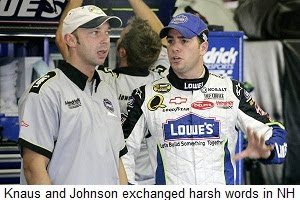 A pair of lackluster performances –- 10th at Chicagoland and 18th yesterday at New Hampshire -- have severely compromised his bid for a sixth consecutive title, and for the first time since that 2006 season, Johnson is no longer the favorite to win it all at Homestead-Miami Speedway. He lags 29 points behind red-hot Tony Stewart with just eight races remaining; about two-thirds of a race under NASCAR’s new, one point per position system.

Johnson at his best would have difficulty erasing such a deficit. And lately, the Hendrick Motorsports driver is showing uncharacteristic signs of weakness, both on and off the race track.

Sunday’s “Sylvania 300” at New Hampshire produced the latest in a growing series of emotional outbursts from the traditionally understated Johnson. He accused Kyle Busch of being “a bit stubborn” after the pair traded sheet metal in the late going, saying, “I had gotten inside of him the lap before and had some contact. He was running really, really tight through the corner (and) as we got off into (Turn) Three, he was so tight next to me (that) it took the air off the spoiler. I was out of control before we ever got to the turn. One of the times we hit, it whipped the wheel out of my hand and bent the right-front suspension. We were kind of dead in the water after that.”

Johnson engaged in a heated radio exchange with crew chief Chad Knaus after the incident; saying the encouragement of his longtime pit boss had become annoying and admonishing Knaus to “just let me do what I do. (Chad) was just being optimistic about what was left in my back pocket,” explained Johnson afterward. “But my suit doesn’t have any back pockets.”

Clearly, the pressure of racing from behind has begun to take its toll on the normally stoic Johnson. “I felt like we had a lot more speed after practice, but we just didn’t have the speed we were hopeful to have,” he explained. “Track position became so important and some things worked against us to mire us back in the pack. I could maybe pass one, two, three cars on new tires, and then stall out like everybody else.”

The five-time champion understands that there is no further margin for error in his quest for a record-setting sixth consecutive Sprint Cup Series title. He knows what it will take to climb out of tenth place in the championship standings, saying, “Obviously, we need eight great ones from here. We can’t run 10th anymore. We need a bunch of (wins).”

Less certain is whether he and his Lowes Chevrolet team have what it takes to prevail in their latest championship battle. “You never know what’s going to happen,” cautioned Johnson. “My experience in winning five (championships) is that we lost the points lead due to a wreck on the last lap at Talladega, and still came back and won.

Unfortunately, Johnson does not appear to have the speed needed to dig out of this championship hole. His average finish over the last three races is an abysmal 19.7, and that kind of performance is not the stuff of which championship comebacks are made.
Posted by Dave Moody at 10:48 AM