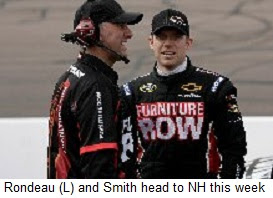 Rondeau is a New England native, hailing from Saco, Maine, located 90 miles north from New Hampshire Motor Speedway's Magic Mile in Loudon. Before he headed south to North Carolina in 1998 to work full-time in NASCAR, Rondeau drove race cars at short tracks throughout New England, including Super Late Model cars on the American Canadian Tour. He also raced seven times at New Hampshire Motor Speedway in what is now known as the K&N Pro Series East.

"I guess you could say New Hampshire Motor Speedway is my home track on the NASCAR circuit," said Rondeau. "It's always nice to return to my roots in New England. I would like nothing better than to walk away with a strong finish on Sunday."

Rondeau knows how it feels to walk out of a race track with a stalwart result. He directed Smith to an upset victory earlier in this year in the Southern 500 at Darlington (S.C.) Raceway. He also saw his driver lead the Daytona 500 with a few laps remaining, finish eighth at Charlotte Motor Speedway and post a third-place result at Indianapolis Motor Speedway in the Brickyard 400.

"We had our goals at the beginning of the year and have achieved most of them," said Rondeau. "We definitely have done enough good things this season to put together a nice highlight video."

The Maine native said his number-one goal for the remainder of the season is to deliver consistency from the single car, Denver, Colorado-based Furniture Row Racing team. "We need more consistency with our finishes," explained Rondeau. "It seems like we have a couple of good races, followed by a couple of bad ones. I would like to see us have results between the Top-10 and Top-15 in the remaining races. That would be a great springboard for 2012.

"When you finish in the 30s, it puts you way behind in points. We've had too many of those types of finishes; most of them as a result of being collected in accidents or mechanical issues."

One of those disheartening Rondeau spoke of came at New Hampshire in July. As the fuel-mileage race was winding down, Smith's Furniture Row Chevrolet was running solidly in 11th place. But as happened to a number of others drivers, the #78 Chevrolet sputtered out of gas on the final lap, relegating he team to a 33rd-place finish.

"That was one of many races that got away from us," said Rondeau. "Hopefully we'll run as strong this weekend at New Hampshire as we did in July, then capitalize on the strong performance with a solid finish." 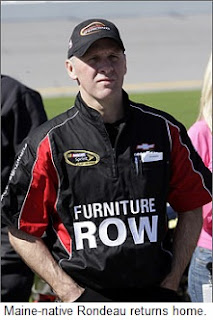 Smith, who honed his fuel management skills en route to a 17th-place finish in Monday's rain-delayed "GEICO 400" at Chicagoland Speedway, agrees with his crew chief when it comes to consistency. "Pete has done a great job for us and I know that being back in New England is a special weekend for him," said Smith. "I agree with what Pete has said about us needing more consistency to get to that next level of competition. You look at the record of the Chase drivers, and consistency is the key to their success."

Coming off two consecutive Top-20 finishes -- 18th at Richmond and 17th at Chicagoland -- Smith said he believes both finishes should have been better. "Our goal every week is to run in the Top-10, and that's what we'll strive for on Sunday."
Posted by Dave Moody at 6:20 PM