Crawford Lands ARCA At Mobile in 2012. 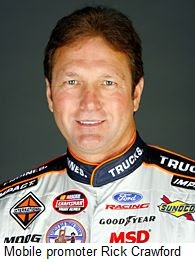 Since taking the promotional reins at the speedway earlier this year, the former NASCAR Camping World Truck Series competitor has infused the facility with new promotions. The latest addition to the program is a newly announced inaugural appearance by the ARCA Racing Series presented by Menards in 2012. The series will run 200 laps on the half-mile, high-banked paved oval on Saturday, March 10, 2012.

Since its inception in 1953, ARCA has raced at over 200 different speedways. Next year's event will be their first at Mobile International Speedway. "The 2012 season is ARCA's 60th, and Mobile will be the first short track on the schedule following the season opener at Daytona in February," said ARCA President Ron Drager. "The ARCA Racing Series short track races have proven to be highly competitive and entertaining, regardless of the venue. Mobile's style of racing lends itself to an exciting ARCA show."
Posted by Dave Moody at 4:02 PM