After 26 races over eight long months, the field is finally set for the 2011 Chase for the NASCAR Sprint Cup. The points have been re-set, the drivers have seeded and NASCAR Nation is primed and ready for this weekend’s Chase opener at Chicagoland Speedway in Joliet, Ill.

Who will hoist the championship trophy after the final checkered flag flies at Homestead-Miami Speedway on November 20? It’s difficult to predict, which is exactly why we’re climbing out on an extremely long limb to register our prognostications for the 2011 championship. Here’s how we see it, with each driver ranked according to their seeding at the start of the Chase. 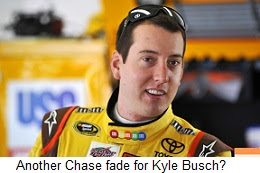 #1 Kyle Busch (2012 points) – Despite owning the #1 ranking and more regular-season wins (4) than any other driver, Busch is anything but a shoo-in when it comes to the championship. He has folded under the pressure of Chase competition in each of his last two attempts, finishing eighth in 2010 and 10th in 2008. The Joe Gibbs Racing engine program continues to struggle, with teammate Joey Logano exploding an engine -- under caution, no less -- at Richmond. Will Busch’s M&Ms Toyota have the reliable horsepower needed to contend for the title? Has Busch himself developed the mental toughness necessary to weather the rigors of the Chase? In this writer’s opinion, significant doubts remain. ODDS: 8:1

#2 Kevin Harvick (2012 points) – If Harvick wins the 2011 Sprint Cup championship, Saturday night’s win at Richmond may qualify as the turning point. After winning three times in their first 12 starts, Harvick and the Budweiser Chevrolet team struggled through a puzzling, mid-summer slump. “To be quite frank, we've run like crap,” admitted crew chief Gil Martin. “We got off our game trying to do things to just win races,” a tactic that produced just two Top-10 finishes in eight races. Harvick was back to his old, dominant self at Richmond, though, leading more laps than any other driver. Better yet, his oft-ridiculed crew put him in position to win with a smoking final pit stop that wrested the lead away from Jeff Gordon. Saturday’s victory was a potential game-changer for Harvick and his team, and if they can carry their regained momentum through the next 10 weeks, he’ll be a “Happy Harvick” indeed at Homestead-Miami Speedway. ODDS: 5:1 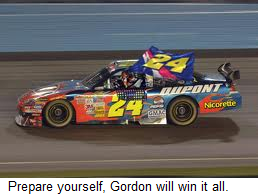 #3 Jeff Gordon (2009 points) – Jimmie Johnson may soon have company on the list of five-time Sprint Cup Series champions. Gordon and his Drive To End Hunger Chevrolet team wasted little time returning to Victory Lane, winning in Week Two of the season at Phoenix International Raceway. They didn’t crack the Top-10 in points until after a runner-up finish at Infineon Raceway in late June, but since then, they have steadily climbed the leader board with a lethal combination of speed and consistency. It will be difficult to claim the championship without winning races, and a trio of 2011 victories at Phoenix, Pocono and Atlanta prove that Gordon has regained his magic touch. Gordon is as confident as we’ve seen him in a long, long time, and the road to the 2011 championship almost certainly leads through the #24 camp. ODDS: EVEN

#4 Matt Kenseth (2006 points) – Again this year, Kenseth may be the “Silent Assassin” of the Chase. He and crew chief Jimmy Fennig have the experience necessary to contend for a title. They also have a pair of regular-season wins at Texas and Dover, but haven’t carried the checkered flag since Dover in mid-May. Consistency is a wonderful thing, but to win a championship in the Chase era, multiple wins in the final 10 races are a must. If Kenseth can crack Victory Lane again in the next 10 races, his consistency may be enough to outdistance the field. If not? Probably not. ODDS: 10:1

#5 Carl Edwards (2003 points) – Remember a few weeks ago, when Edwards led the championship points and was the consensus pick to end Jimmie Johnson’s five-year championship reign? Happy days may soon be here again. A surprising slide that saw Edwards finish outside the Top-10 four times in five weeks dropped him to fourth in the championship standings, but since then, Edwards and crew chief Bob Osborne seem to be rounding back into form. A solid, runner-up showing behind winner Kevin Harvick at Richmond indicates that Roush Fenway Racing may finally have solidified its short-track game. Added to an already potent intermediate program, Edwards may finally be ready to challenge for the Sprint Cup championship. ODDS: 5:1 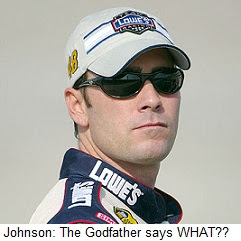 #6 Jimmie Johnson (2003 points) – How do you pick against the five-time and defending NASCAR Sprint Cup Series champion? Here’s how. Johnson has won only one race this season -- back in April at Talladega – and twice recently, he’s come up short in the kind of late-season battle he always used to win. “Five Time” surrendered the lead to Kyle Busch in the final laps at Pocono, then failed to overhaul teammate Jeff Gordon down the stretch in Atlanta two weeks ago. He and crew chief Chad Knaus have not shown the speed that allowed them to dominate previous editions of the Chase, and Johnson has inexplicably allowed himself to be caught-up in a personal feud with Kurt Busch. The last thing you need in the Chase – when one bad finish can spell the end of a championship bid -- is an enemy. Jimmie looks distracted and half a step slow, and that’s a tough combination to overcome. ODDS: 4:1

#7 Kurt Busch (2003 points) – With apologies to Pastor Joe Nelms, Busch has a smokin’ hot Dodge and the ability to win just about any race he’s in. He’s also feuding with Johnson, nurturing a fragile relationship with the crew he cussed out in public not long ago, and threatening to beat up reporters who insist on asking him about his own, often misguided post-race comments. When you’re Kurt Busch, there always seem to be distractions. Too many distractions, in the end. ODDS: 12:1.

#8 Ryan Newman (2003 points) – The highlight of Newman’s season came when he drove to Victory Lane at New Hampshire Motor Speedway in July. Since then, it’s been a rollercoaster ride for the Rocketman. Like his boss, Tony Stewart, Newman has been unable to string together the kind of consistent finishes that win championships. With no full-time Competition Director in place since Bobby Hutchens was released in early June, the problem is almost certainly institutional in nature. Unfortunately, it won’t be fixed in time to make Newman a title contender. ODDS: 15:1

#9 Tony Stewart (2000 points) – Where there’s Smoke, there’s not necessarily fire. Stewart’s customary midsummer surge never materialized this time around, leaving him winless through the 26-race regular season. That may change in the Chase, but by his own admission, the two-time Sprint Cup Series champion does not appear to be championship material in 2011. ODDS: 15:1 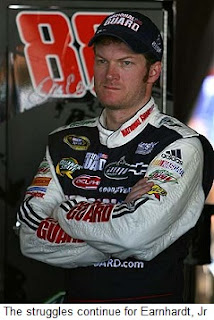 #10 Dale Earnhardt Jr. (2000 points) – Like Stewart, Junior has gone 0-for-26 in 2011 to date, extending his personal winless streak to 119 races. He got Earnhardt Nation all hot and bothered early, claiming the Daytona 500 pole, posting Top-5 finishes in five of the first eight races and climbing as high as third in points. Since then, though, it’s been a steady and agonizing downward slide for NASCAR’s Most Popular Driver. He dodged a major bullet Saturday night at Richmond, crashing early, making no less than 16 pit stops to repair a badly mangled race car, then limping into the Chase as the final Top-10 qualifier. He may be able to win a race before it’s over, but he has shown no signs of being a title contender. ODDS: 20:1

#11 Brad Keselowski (2000 points) – Keselowski hopes to join the Green Bay Packers and become the second Wild Card contender to win a major North American sports championship in 2011. And like the Packers, he may have the horses to do it. The second-year Penske Racing driver has been virtually unstoppable since breaking his ankle in a savage, early August testing crash at Road Atlanta, winning twice and finishing no worse than sixth in the ensuing five races. He and crew chief Paul Wolfe have everything it takes to win, including the experience earned in last year’s triumphant Nationwide Series title run. Can they win the Sprint Cup Chase? Probably not, at least in their first try. But they’ll be heard from, for sure. ODDS: 6:1

#12 Denny Hamlin (2000 points) – If the term “Wild Card” ever fit anyone, it fits Denny Hamlin this season. After challenging for the championship all the way to Homestead a year ago, Hamlin’s 2011 campaign has been maddeningly inconsistent. He has recorded three Top-10 finishes in a row – including a ninth at Richmond after overcoming an early crash and claiming the final spot in the Chase – but was 27th, 15th, 36th and 35th in the previous four races. That kind of inconsistency gets a guy nowhere fast in the Chase, and Hamlin will have to turn things around in a hurry to be a factor. ODDS: 18:1