Why Are NASCAR's Ratings On The Rise? 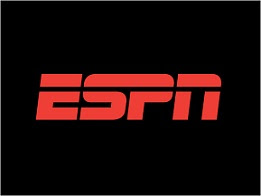 After more than two years of steady decline, ratings for NASCAR Sprint Cup Series racing are suddenly on the rebound. Ratings for Sunday’s ESPN broadcast of the “Sylvania 300” from New Hampshire Motor Speedway were up 19 percent over last year's New Hampshire race, averaging 4,235,000 viewers according to Nielsen Media Research. Sunday’s event earned a 3.1 rating, compared to a 2.6 rating a year ago; good for approximately 558,000 additional viewers.

There are a number of possible explanations for this sudden ratings surge. Sunday’s 2 pm ET start – one hour later than in the regular season – almost certainly played a role, reeling-in viewers when they wandered away from their favorite National Football League game at halftime. ESPN’s new NASCAR NonStop format – with a split-screen featuring racing on one side and commercial announcements on the other -- gave viewers fewer opportunities to wander back to the gridiron, as well.

There were four fewer minutes of commercial announcements in this year’s race than in 2010, and NASCAR’s Most Popular Driver, Dale Earnhardt, Jr., was in the thick of the championship chase for the first time in recent memory. After racing to a third-place finish in the Chase opener a week before at Chicagoland Speedway, Earnhardt was a contender again at New Hampshire, remaining in contention for the win until a flat tire relegated him to a disappointing 17th place finish. Whether Earnhardt remains a factor in the Chase going forward remains to be seen, but at New Hampshire, he was a player. 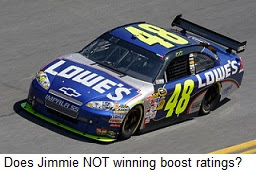 More difficult to quantify – but undeniably a factor – is the prospect of NASCAR crowning a champion not named Johnson for the first time in more than half a decade. Fairly or not, many NASCAR fans have grown tired of laying down their hard-earned money to see the same movie, over and over again. We won’t see the closing credits of year’s motion picture for a few weeks yet, but it appears we may have an new leading man in 2011.

Ratings for ESPN's portion of the NASCAR Sprint Cup season are up two percent over last year; a figure that does not include three rained-out races that ran the following day. It does, however, include the Bristol race, which was pre-empted in favor of NFL preseason football in a number of prime markets, dramatically impacting the overall numbers.

After a long drought, it appears NASCAR’s ratings are finally on the rebound. The reasons for that surge remain open for debate.
Posted by Dave Moody at 9:28 PM