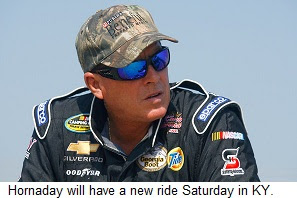 KHI’s #2 Truck has been piloted by a number of drivers this season -- including Kevin Harvick, Elliott Sadler and others -- and holds a 33-point edge over the #18 Kyle Busch Motorsports Toyota in the battle for the owner’s title. KHI co-owner Delana Harvick said the ride swap will be "a week by week process," with Cale Gale replacing Hornaday in the #33 Rheem Heating and Air Conditioning Chevrolet this weekend in Kentucky. The #33 truck is currently seventh in owner points and out of title contention.
Posted by Dave Moody at 8:21 PM