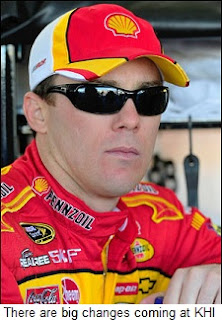 Richard Childress Racing and Kevin Harvick Incorporated announced today that they have reached agreement on a collaborative effort that will have KHI's NASCAR Nationwide Series program merge with RCR next season.

KHI will continue to be involved on the business and competition sides with RCR, and Harvick said he and wife DeLana will remain extremely active in the newly merged Nationwide Series program. The #2 and #33 teams will continue, with Elliott Sadler driving the #2 Chevrolet in a full-time championship bid and a combination of RCR's Sprint Cup Series drivers sharing time in the #33 Chevrolet.

"KHI and RCR have worked together very closely over the last several years," said Kevin Harvick. "DeLana and I are fortunate that Richard has always been supportive of KHI over the last 10 years. We feel like this merger will benefit our on-track performance as well as provide our sponsors with more opportunity off track. We will still be very involved and are excited about the Nationwide team's new direction."

RCR and KHI have enjoyed more than a decade of success in the Nationwide Series. RCR earned 55 victories and five championships from 1999 to 2010, with Harvick responsible for 32 victories and three titles (overall in 2001 and 2006 and the owner's championship in 2003 with driver Johnny Sauter). KHI has earned 10 victories since beginning its independent program in 2004.

"A few years ago, Richard Childress Racing moved its NASCAR Nationwide Series efforts to Kevin Harvick, Incorporated to assist KHI in strengthening its overall program," said Richard Childress, president and CEO of Richard Childress Racing. "When Kevin and DeLana decided they were interested in consolidating operations, it made sense to merge our efforts. RCR is committed to the Nationwide Series as part of our overall team and driver development efforts. This move will continue the close collaborative effort RCR and KHI have enjoyed for the past 10 years."
Posted by Dave Moody at 6:04 PM