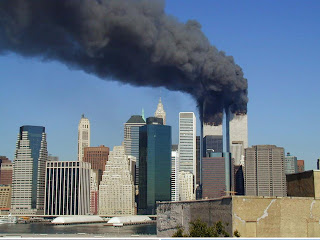 NASCAR and its radio and television broadcast partners will recognize the 10th anniversary of the 9/11 attacks Saturday night at Richmond International Raceway with a special moment of silence. On laps 9-11 of the NASCAR Sprint Cup Series “Wonderful Pistachios 400,” commentators for both ABC Television and Motor Racing Network radio will fall silent, in tribute to those who lost their lives in the terrorist attacks on New York City, the Pentagon and United Airlines Flight 93, which crashed in a field in Shanksville, Pa.

The speedway has planned a patriotic pre-race ceremony for Saturday night, highlighted by Wounded Warriors saying the Pledge of Allegiance, NYPD Officer Daniel Rodriguez performing "God Bless America" and the U.S. Army Infantry Division Band performing the National Anthem. First responders will also be honored with a special ladder-truck American flag display. A first responder and Tanker 627-4 truck from the Shanksville, Pa. Volunteer Fire Dept. that responded on 9/11 will represent the Flight 93 National Memorial in Richmond, as well.

The U.S. Army announced this week that both its NHRA and NASCAR teams will honor victims of the Pentagon attack with special paint schemes, as well. At last weekend's Mac Tools U.S. Nationals in Indianapolis, Tony Schumacher's U.S. Army Top Fuel dragster carried the names of the 75 U.S. Army personnel killed in the Sept. 11 Pentagon attack. Saturday night, Stewart-Haas Racing driver Ryan Newman will also carry the names of those 75 victims on his #39 U.S. Army Chevrolet, along with the inscription, "We Will Never Forget" and a specially-designed logo featuring the World Trade Center's Twin Towers, the Pentagon and the American flag.

"There's no question it will be an emotional time for not only my team, but the entire NASCAR family," said Newman. "We all remember where we were and what we were doing when the news surfaced about the attacks. I know it will be etched in my memory forever. And it should be that way for everyone. We want to win every race for the Army, but you can imagine how much more we'll want to win the Richmond event. It would be a very special, touching moment if we could drive into victory lane carrying the names of those great Americans."
Posted by Dave Moody at 11:20 AM