Germain Racing currently fields a trio of Truck Series Toyota Tundras for former series champion Todd Bodine, Brendan Gaughan and Max Papis, in addition to a full-time Sprint Cup Series Toyota driven by Casey Mears and a start-and-park entry for Mike Skinner. Hillman, Jr. called a meeting this morning and told employees, “If you’ve got other offers for 2012, take them.” The team has struggled this season, with Bodine currently 10th in Truck Series points, Gaughan 13th and Papis 15th.

Mike Hillman, Sr., told Sirius Speedway today that uncertainty in the motorsports industry has the team proceding with caution. “With Kevin Harvick shutting down, Red Bull Racing potentially not coming back and some other teams uncertain for next year, this could be the roughest winter we’ve seen in racing for a long time,” he said. 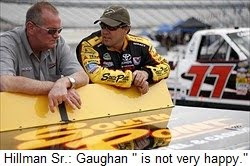 Hillman revealed that financing for two of the team’s three Truck Series teams is uncertain at present. “Brendan (Gaughan) is not very happy here, and I think GEICO will be putting all their sponsorship eggs in the Sprint Cup basket next season,” he said. “Right now, with funding for the 62 and 9 trucks not in place for 2012, I thought it best to tell our employees where things stand. I had Mike Jr., tell everyone in our Monday morning meeting that anyone who has a good job offer come along, they need to take it now, rather than end up on unemployment in November when a lot of other people could be in same boat, looking for work.”

Hillman said there is still a chance that all three Camping World Truck Series teams could return next season. “We’re still putting all our stuff in place to see where we’re headed,” he said. “The 5 truck is good. We’re having good discussions with (current sponsors) International Truck and Georgia Boot, and hopefully, we can get everyone back on board. We’ve always figured out a way to make it work, but I don’t want to mislead anyone, either. If there is no funding for the other trucks…”

Hillman said he expects GEICO to shuffle the money currently earmarked for Max Papis’ Truck Series program into the #13 Sprint Cup Toyota driven by Casey Mears. “I’m 90% sure that money will go to the Cup team, to extend (GEICO’s) schedule to 24 or 25 races next season,” he said. “The 60 (Sprint Cup) car is under discussion, to figure out where we’ll head with that. We’d like to own our own motors next season and run that program like Tommy Baldwin runs his, allowing us to race more, and more often. And hopefully, Mike Skinner can sell some sponsorship so we can put him in a Truck a few times next year.”

A call placed to Germain Racing majority owner Bob Germain today was not immediately returned. Germain bought-out brothers Steve and Rick Germain earlier this season, and said last month that he hopes to form a new NASCAR National Series team with Naples, Fla., resident O.B. Osceola, Jr. next year. Germain-Osceola Racing would field an entry on the NASCAR Sprint Cup, Nationwide or Camping World Truck Series for a still unnamed driver, with backing projected to come from a number of Native American nations. Germain said at the time that his new team would operate as a subsidiary of Germain Racing.

Gaughan declined to comment on his plans for 2012, saying, “I am 100% focused on winning the races we have left this season. I don’t know much about the business side of things at Germain Racing. My only worry right now is being as good as we can be on the racetrack.”
Posted by Dave Moody at 2:41 PM