NASCAR President Mike Helton said today that after reviewing audio and video footage of last Saturday's night's spin by Paul Menard at Richmond International Raceway, he see no basis for any penalties against Menard or his team, Richard Childress Racing. 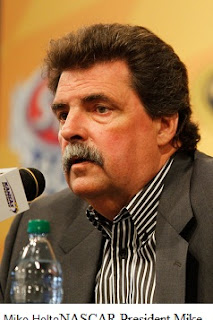 Menard's spin with 16 laps remaining in Saturday's "Wonderful Pistachios 400" brought out a caution flag that erased the comfortable lead held by Jeff Gordon and gave Menard's RCR teammate, Kevin Harvick, an opportunity to take the lead on the ensuing restart. Harvick eventually passed Gordon and pulled away to win his fourth race of the 2011 season, prompting Gordon to question whether Menard's spin had been intentional.

Menard insists that his right-rear tire began going flat a lap before his Turn Four spin, and Harvick said he was told by team officials that the tire was "down to the cords." Childress has categorically denied any wrongdoing on the part of his team.

NASCAR's Helton said earlier today that the sanctioning body would investigate the spin, adding, "We're going to look into it and see if there's anything. A lot of it is going to be interpretation. Certainly, it's on us to understand exactly what all we can find as far as facts are concerned. It's on all of our shoulders to get the facts right, and if there's something there, we should find out about it and be sure that we've got it right."

After a close examination of the team's in-car audio and television footage of the spin, Helton said there is no concrete evidence of any wrongdoing, and that NASCAR considers the case closed.
Posted by Dave Moody at 2:11 PM