Just days after the Red Bull Racing NASCAR Sprint Cup Series team confirmed that more than 150 employees will lose their jobs if the team closes its doors on December 17, more than 200 employees of Kevin Harvick Inc., and Germain Racing received similar notices this week. 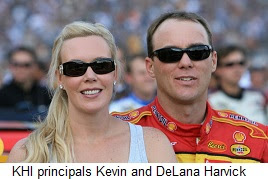 KHI has already announced plans to merge its Nationwide Series effort with Richard Childress Racing, while shutting down its Camping World Truck Series operation. The team filed notice under the North Carolina Worker Adjustment and Retraining Notification Act (WARN) this week that it will lay off approximately 103 workers on or about Nov. 25; a week following the Camping World Truck Series finale at Homestead Miami Speedway. KHI recently sold its #8 and #33 Truck teams to Eddie Sharp Racing, and co-owner Delana Harvick said Sharp has expressed an interest in hiring an unspecified number of displaced KHI’s employees for his operation. She called that commitment “a major factor” in the decision to sell KHI’s truck teams to ESR.

Germain Racing confirmed today what SiriusSpeedway.com first reported on September 12; that it will lay off an unspecified number of employees at season’s end, as well. General Manager Mike Hillman, Sr., blamed the cutbacks on uncertainty surrounding the team’s three Truck Series entries. He said that while Germain will field its #9 GEICO Sprint Cup Series Toyota again next season, there is currently no sponsorship in place for the Truck Series Tundras currently driven by Todd Bodine, Brendan Gaughan and Max Papis. Gaughan is expected to leave the team at the end of the season, and while Bodine says he would like to return to Germain next season, he admitted that he has spoken to other teams about possible rides for 2012. Papis’ plans for next year are uncertain. 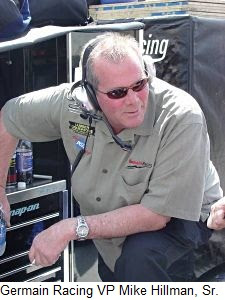 Hillman said layoffs are not uncommon at the end of a race season, adding, “We began this process two weeks ago, and it’s not a lot different than what we’ve been through in previous seasons. We have been fortunate to sign a lot of our (sponsorship) deals in December and January. Unfortunately, that saddles us with layoffs in November.” He said Germain Racing informed employees of potential layoffs to warn them “that they should be sure they are comfortable with their employment situation for the coming season.” He said the team has no plans to close its doors, saying Germain Racing “will be in business in 2012 and beyond (and)… will continue to work on securing sponsorship in order to pursue more NASCAR success in the future.”

The state of North Carolina requires employers to provide 60-days notice if at least 50 employees (or 33% of the company’s total work force) will be laid off at an individual site.
Posted by Dave Moody at 8:56 PM