A Simpleton's Guide To Making The Chase

From now on, it’s all about the math.

Eight of the 12 available spots in the 2011 Chase for the NASCAR Sprint Cup have now been filled, with Kurt Busch and Ryan Newman securing their positions in Tuesday’s rain-delayed Advocare 500 at Atlanta Motor Speedway. They, along with point leader Jimmie Johnson, Kyle Busch, Carl Edwards, Matt Kenseth, Jeff Gordon and Kevin Harvick have now locked up berths in NASCAR’s postseason. 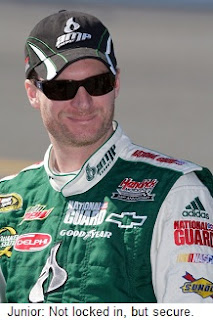 Fifteen other drivers – from ninth-place Dale Earnhardt, Jr., to David Ragan in 23rd – all have at least a mathematical chance to make the Chase, depending on how they (and others) fare on Saturday night. Here’s what it will take for your favorite driver to punch his ticket to the playoffs.

Dale Earnhardt Jr. – Currently ninth in the championship standings, Earnhardt is 25 points ahead of 11th-place Brad Keselowski. He could conceivably fall out of the Top-10 Saturday night, but needs only to finish 20th or better to lock-up his spot in the Chase. Even a non Top-20 finish could do the trick for Earnhardt, as long as he finishes within hailing distance (25 positions) of Keselowski.

Tony Stewart – Like Earnhardt, Stewart needs only a mediocre night at Richmond to make the Chase. A finish of 18th -- or a spot no more than 22 finishing positions behind Keselowski -- will turn the trick. Stewart is a three-time winner at Richmond, and has an average finish of 11th in 25 career starts at the fairgrounds oval, indicating that an 18th-place night should be well within his grasp. If Smoke stumbles Saturday evening and winds up out of the Top-10, he can still make the Chase if Paul Menard, Marcos Ambrose and David Ragan all finish the regular season outside the Top-20 in points.

There are a number of scenarios that could come into play if either Earnhardt or Stewart fall out of the Top-10 Saturday night. But the likelihood of that happening is so remote that we will ignore those scenarios here.

Denny Hamlin -– The Fed Ex Toyota driver has had an uncharacteristically rough season to date, but is a two-time Richmond winner; including last year’s fall race. He has an average finish of 7.5 in his 11 career starts at RIR, and enters Saturday night’s race with the second and final Wildcard spot in hand. He will clinch that position –- no matter where he finishes -– if AJ Allmendinger, Clint Bowyer, Greg Biffle, Martin Truex Jr., Kasey Kahne, Joey Logano, Paul Menard, Marcos Ambrose and David Ragan fail to win Saturday night’s race. If Allmendinger, Bowyer, Biffle, Truex, Kahne or Logano wins, Hamlin can still make the Chase by running well enough to stay ahead of them in the point standings. 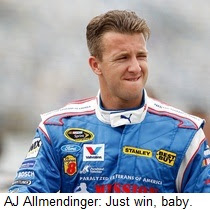 AJ Allmendinger -– The Dinger has never finished better than seventh in nine career Richmond starts, and he’ll need to better that considerably Saturday. Nothing less than a win will do, and even if he is able to drive to Victory Lane, he must also vault past Hamlin in the point standings in order to make the Chase.

Clint Bowyer -- Crashing out of Tuesday’s race at Atlanta Motor Speedway did not help Bowyer’s chances. Like Allmendinger, he can clinch a Chase berth only by winning Saturday night and finishing ahead of Hamlin in the final regular-season points. Bowyer has visited Richmond’s Victory Lane in the past, so there hope remains for fans of the #33 Chevrolet.

Greg Biffle –- Biffle has never won at Richmond in 18 prior attempts. That will have to change Saturday. The Biff can clinch a Chase berth only by winning the race and finishing ahead of Hamlin in the final regular-season points.

Martin Truex Jr. -– Currently 16th in the standings, he could steal the final Wildcard spot by winning at Richmond and finishing ahead of Hamlin in the final regular-season points. His Richmond resume features just one Top-5 finish (a fifth) in 11 career Sprint Cup starts.

Kasey Kahne –- Another member of the “Must Win Club,” Kahne makes the Chase only if he wins Saturday night, and jumps past Hamlin in the final regular-season points. The Red Bull Toyota pilot has won at Richmond before, in May of 2005.

Joey Logano -– Must win Saturday night and finish ahead of Hamlin in the final regular-season points. Unfortunately, that can only happen if Denny fails to take the green flag in the “Wonderful Pistachios 400;” making Logano a long shot, at best. 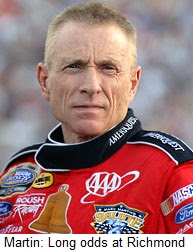 Mark Martin -– Must win and have Keselowski bump either Earnhardt or Stewart out of the Top-10; something we already agreed is highly unlikely to happen. Martin's odds make Logano look like a good bet.

Paul Menard -– If he wins, he’s in. It’s as simple as that. Unfortunately, Menard has struggled at Richmond in past seasons, forging a best career finish of 16th.

Marcos Ambrose –- The “Thunder From Down Under” must win Saturday night’s race and climb back into the Top-20 in points. Nothing less will do.

Juan Pablo Montoya -– Despite being 22nd in points, the Target Chevrolet driver can secure a Chase berth by winning Saturday night while Menard finishes worse than fourth. He must also fight his way back into the Top-20 in the final regular-season points.

David Ragan -– Must win Saturday night and move back into the Top-20 in final regular-season points. In nine career Richmond starts, Ragan has a pair of Top-5 finishes, including a third.

Of all those scenarios haven’t got your head throbbing, it’s doubtful that anything will, at least until we start re-calculating the points for the start of next week’s Chase.
Posted by Dave Moody at 1:28 PM