Earnhardt To Race For Grand Am Title

The Earnhardt family has accomplished nearly every goal it has set in the world of motorsports. Jeffrey Earnhardt will now set his sights on a family first; winning the championship in the Grand American Rolex Sports Car Series. The fourth-generation driver -- grandson of seven-time NASCAR Sprint Cup Series champion Dale Earnhardt, Sr. -- has signed a deal to contest the full season of Grand Am Rolex Series GT Class racing in 2012 with Rick Ware Racing. 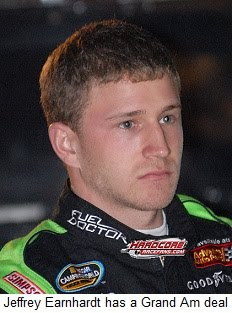 Earnhardt has made just six NASCAR starts this season; two in the Nationwide Series and four in the Camping World Trucks, all for Rick Ware Racing. He finished seventh int he Truck Series season opener at Daytona International Speedway; the high-water mark of his season. He has prior experience in the Grand Am ranks, after making his series debut in the 2011 Rolex 24 at Daytona driving a Rick Ware Racing Porsche GT3. The team raced to an 11th-place finish in the Grand Touring class -- 25th overall -- in their first-ever attempt at the grueling, around the clock event.

“I have never experienced any type of racing like that before, said Earnhardt today. "It was definitely a rush and I look forward to competing in the 50th Anniversary of the Rolex 24 Hours of Daytona in 2012 with RWR.”

He will run the #15 on his car next season, a number his grandfather utilized 30 years ago while driving the Wrangler Jeans Ford for Bud Moore Racing on the NASCAR Winston Cup Series. “The 15 number is a pretty cool deal,: said Jeffrey Earnhardt. "I have seen pictures of the car (my grandfather) drove with it, before he jumped into the #3. To start my Grand Am career with it will hold a special place to our family and fans.”

Earnhardt will also make his Indianapolis Motor Speedway debut next season, when the Grand Am Rolex Series heads to the “Brickyard” for their first-ever event, to be held as part of he legendary track's annual NASCAR Sprint Cup Series weekend.

“To compete at the Brickyard is a dream for any racer in any series," he said. "The history is rich and the atmosphere is electric. To be a part of the inaugural event makes it that much sweeter."

The North Carolina native said he is not concerned about making the switch from NASCAR-style stock cars and trucks to the Grand Am Sports Car Series, adding, "I have always done well on road courses, so this seems like the natural progression for my career. Besides that, Grand Am has a great marketing avenue to sponsors that reaches globally and yet is more interactive with fans with their hauler-garage setups, something we are looking forward to exploring with our program.”