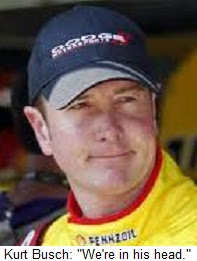 Contact from Busch sent Johnson spinning into the Turn Two wall midway in Saturday night’s race. An admitted payback move by Johnson 60 laps later sent Busch for a similar loop. After calling Johnson “a five-time chump” after the race, Busch was asked about their feud by NASCAR.com reporter Joe Menzer. “Can either you or Jimmie win the Chase…” said Menzer, only to be interrupted by Busch. “How did I see you were going to come with that,” said the Penske Racing driver as he turned to walk away. “We’re good.”

Menzer countered that repeated incidents with Johnson made his question legitimate, prompting Busch to turn and yell a series of expletives, lunging toward Menzer before being physically restrained by his Shell-Pennzoil crew. Busch approached Menzer again prior to his mandatory, post-race Media Center interview, with additional heated words exchanged.

For his part, Johnson characterized the conflict as a simple case of payback. “I got run over going into Turn One,” he explained. “If you’re going to spin me out, I’m going to spin you out. It’s just part of it. I’m sure I’ll go find him and talk to him, he’ll run his mouth and we’ll go from there.”

“We raced down into Turn One and I locked up the left front trying to avoid him,” countered Busch. “When he came back to us, you could see (the payback) coming. That’s not something you see from Jimmie Johnson every day, so I know we’re in his head. If we’re going to race this way, he’s got to worry that there’s 10 other guys in this Chase, not just (me).”

Busch later tried to distance himself from his “we’re in his head” comment. Asked about it again by reporters, he insisted, “I didn’t say that tonight. Did not.’’ When a reporter showed him a transcript of his comments provided by Dodge Motorsports, Busch snatched the paper out of a reporter’s hand, tore it to pieces and stalked out of the room.

“Competition is competition,” said Johnson in his Media Center briefing. “There have been plenty of rivalries. I've been through a lot of it. The bottom line is we can race out there without running into each other. Unfortunately, (Kurt and I) have had a history over the years. We spoke a few minutes ago up on the stage, and I certainly hope it's behind us. I have no intention to run people over… (but) I'm just not going to let people run our race car over. There's been a lot of contact going on, and that's why I retaliated tonight. It was a good time to do it.”

Johnson said he hopes he and Busch can put their differences aside for the championship Chase. “We've raced together the last two (or) three weeks and been just fine on the racetrack,” he said. “We can do it. It can be done. It's possible, and I think it's in both of our best interests to get it behind us and go forward.’’ 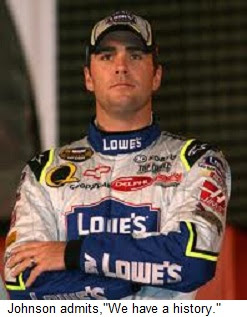 Saturday night’s incidents were not the first between Johnson and Busch this season. A last-lap fender banging duel at Pocono Raceway in August inspired harsh words from both drivers, with Busch saying the five-time champion expects kid-glove treatment from his fellow competitors. “I didn’t know we were supposed to pull over (with) five to go,” said Busch afterward. “I raced him hard, I raced him smart and I raced him clean. And he wants to come over here and bitch about it.”

Neither Johnson nor Busch had anything to lose Saturday night. Both arrived in the Commonwealth State locked into the 2011 Chase, making Richmond the perfect place to flex some muscle and settle an old score. Next weekend at Chicagoland Speedway, however, the landscape will be dramatically different. With just 10 races remaining to contend for the Sprint Cup championship, there will be no room for feuding, ill-will or paybacks. Can Johnson and Busch table their personal issues and concentrate on the big picture? Or will their next “Clash of the Titans” signal the end of someone’s championship dream?

"Jimmie is too smart to mess with him during the Chase,” said Hendick Motorsports owner Rick Hendrick. “Is Kurt smart enough? I don't know."
Posted by Dave Moody at 2:22 PM