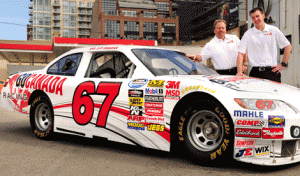 Fitzpatrick has made a handful of starts in the #67 GO Canada Racing entry this season, including a season high fifth-place finish two weeks ago at Circuit Gilles Villeneuve in Montreal. He announced last night that he will focus his attention on the NASCAR Canadian Tire Series effort for the remainder of the season, saying, "I think I played a large role in helping GO Canada develop their program. I want to thank all the guys at the shop in Nashville for all their hard work (and) thanks to Steve Meehan for bringing me in at the beginning to do that."

Fitzpatrick said he hopes to be back on the NASCAR Nationwide Series before the end of the season, and promised to make "some really cool announcements about the continued development of my NASCAR career" in the near future.

Before turning his attention to NASCAR, Meehan was the co-founder and CEO of the Canadian investment firm Investment Planning Counsel, which managed $15 billion in assets and had more than 1,000 financial planners. He has no announced a replacement for Fitzpatrick at GO Canada Racing.
Posted by Dave Moody at 1:02 PM