Tony Stewart is learning what Jimmie Johnson has proved over and over again in the last five seasons; that regular-season momentum is not all it’s cracked up to be. 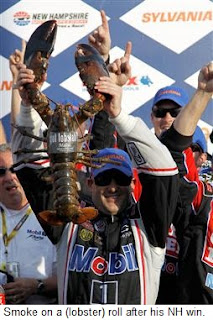 After going 0-for-26 in NASCAR’s 2011 regular-season, the two-time NASCAR Sprint Cup Series champion became only the second driver to win two consecutive races at the start of the postseason Chase, claiming the “Sylvania 300” at New Hampshire Motor Speedway. Stewart’s win came at the expense of Clint Bowyer, who forfeited the lead after running out of fuel with just three laps remaining. Ironically, Bowyer won the fall New Hampshire race a year ago when Stewart’s fuel cell sputtered dry within sight of the checkered flag.

“I know exactly how (Bowyer) feels right now,” said Stewart after the race. “I saw him slow down on the backstretch and thought, `You’ve got to be kidding me.’ It’s not the way I want to win, for sure, but we’re in the Chase now and you take it anyway you can get it.”

His second consecutive victory of 2011 allowed Stewart to wrest the points lead away from Kevin Harvick. Stewart now tops the Sprint Cup leader board for the first time this season by 7 points over Harvick. “We felt like this weekend would be a good opportunity after what we did here in the spring,” said Stewart, who trailed teammate Ryan Newman to the line in a 1-2 Stewart Haas Racing finish at Loudon in mid-July. Even with a two-race win streak in hand, however, Stewart cautioned, “we’ve still got a long way to go.”

On a day when others complained bitterly about the difficulty of passing on the flat Loudon oval, Stewart surged forward almost immediately from his 20th starting spot, gaining positions consistently throughout the day and conserving just enough fuel in a final, 50-lap green flag run to overhaul Bowyer and claim the checkered flag and a full share of championship momentum. 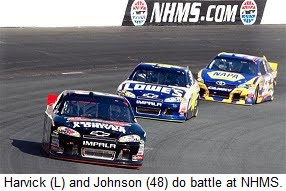 While Stewart’s championship stock soared Sunday, his fellow championship contenders experienced a mixed bag of success. Harvick nursed a dwindling fuel tank all the way to the checkers, claiming a 12th place finish that leaves him seven points behind Stewart heading to Dover next weekend. It wasn't the dominant performance he and his Budweiser Chevrolet team had hoped for, but the ability to salvage a decent day when so many other title contenders could not keeps them near the top of the list of title contenders with eight races to go.

Brad Keselowski shows no sign of folding under the pressure of his first Sprint Cup title run. The Wild Card qualifier followed a fifth-place finish in last week’s Chase opener at Chicagoland with a runner-up showing Sunday in New Hampshire, closing to third in the championship standings, just 11 behind Stewart.

Carl Edwards left Loudon fourth in points -- 14 behind Stewart – and has some explaining to do in tomorrow’s Roush Fenway Racing competition meeting after inadvertently dumping teammate Matt Kenseth midway in Sunday’s race. “The most frustrating part of my day was wrecking my teammate down there in Turn Two,” admitted Edwards afterward. “I did everything I could possible do to slow down (and avoid hitting Kenseth), but I couldn’t stay off him.”

Jeff Gordon broke out the shovel and began digging out of the hole he dug for himself at Chicagoland, running among the leaders all day and claiming a solid, fourth-place finish at NHMS. There’s still some shoveling to do, as evidenced by a 23-point deficit to Stewart, but Gordon Dupont/Drive To End Hunger Chevrolet team sent a clear message Sunday that they are not ready to be written off, just yet.

Kyle Busch finished 11th Sunday in Loudon, but once again struggled to deal with the pressure of Sprint Cup championship contention. Contact with defending champ Jimmie Johnson nearly sent Busch over the edge late in the race, triggered an obscenity laced radio tirade that ended only after crew chief Dave Rogers admonished Busch to rein-in his volatile temper and “get your head in the game.” To Busch’s credit, he did. But the damage was already done. Kyle now stands sixth in points, 26 behind Stewart.

Matt Kenseth dodged a major bullet Sunday, after being unable to dodge the errant front bumper of teammate Edwards. His Affliction Clothing-sponsored Ford overcame a disappointing, 27th-place qualifying effort, racing through the field no less than twice en route to a sixth-place finish that leaves him seventh in points, -26 to Stewart. The circuit heads to the Monster Mile at Dover this weekend; a track where Kenseth has dominated in the past. Another dose of domination could put him back in the thick of the title chase.

Dale Earnhardt, Jr. saw an extremely competitive day ruined by a pair of cut right-front tires. The Amp Energy/National Guard driver eventually finished 18th at Loudon, dropping from fifth to eighth in championship points. Earnhardt blamed overly aggressive camber settings for his tire issues, and called the finish “frustrating.” He is now 26 point behind Stewart in the battle for the championship, leaving his fans dreaming of what might have been. 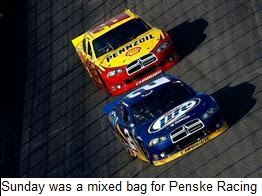 Kurt Busch’s problems began long before the green flag waved Sunday. His Shell-Pennzoil Dodge failed a first attempt at NASCAR’s pre-race inspection, forcing his team to make adjustments to the car’s rear end and present it for inspection a second time. The car was cleared for competition just 10 minutes before the command to fire engines, and a 22nd-place finish in the “Sylvania 300” left Busch ninth in points, 28 behind Stewart.

Jimmie Johnson’s quest for a sixth consecutive Sprint Cup championship suffered a major blow Sunday at the Magic Mile. Johnson and his Lowe’s Chevrolet team never approached their usual postseason form, and lost a number of positions in that late-race fender swapping session with Kyle Busch en route to a lackluster, 18th place finish that leaves him 10th in points, 29 behind the leader. There haven’t been many “do or die” moments for Johnson in past Chases, but next weekend’s race at Dover may be precisely that.

Ryan Newman qualified on the pole and led the first 59 laps Sunday, only to come up short when it mattered most. His US Army Chevrolet limped onto pit road for a splash of fuel with less than 10 laps to go, relegating him to a crushing, 25th place finish. That showing undid all the good done by last weekend’s Top-10 showing at Chicagoland, leaving the Rocketman 11th in championship points, 34 behind teammate Tony Stewart

After badly damaging his title hopes with a 32nd-place finish in Joliet last weekend, Denny Hamlin had another ugly day Sunday. The Fed Ex Toyota driver gambled on fuel and came up a whopping three laps short en route to a 29th place finish that leaves him a whopping 66 points behind; thoroughly, completely and undeniably out of title contention.
Posted by Dave Moody at 6:54 PM