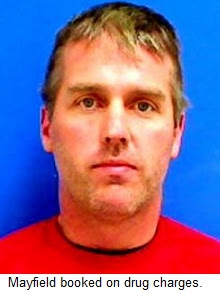 The suspended NASCAR Sprint Cup Series driver was arrested in his Catawba, NC, home Tuesday night and charged with possession of methamphetamine. A spokesperson for the Catawba County Sheriff's Office says deputies executed a search warrant at Mayfield's home last night after receiving a tip that there was stolen property belonging to the Red Bull Racing NASCAR Sprint Cup Series team inside the residence. Once inside, deputies discovered approximately 1.5 grams of methamphetamine and a number of items believed to be stolen. Mayfield is currently charged only with possession of methamphetamine, pending verification that the items taken from his home are indeed stolen. Sheriff's deputies also confiscated approximately 50 guns from the Mayfield home.

Mayfield was released on $3,000 bond and is scheduled to appear in court Wednesday morning. He was suspended indefinitely from NASCAR after failing a random drug test in May of 2009, but has steadfastly maintained his innocence, claiming his test results were falsely skewed by his use of Adderal prescribed for Attention Deficit Disorder and an over-the-counter allergy medication Claritin D and . accusing NASCAR of altering the results of his drug test, failure to follow proper drug screening protocol.

Red Bull Racing President Jay Frye said today that he has no knowledge of the investigation, beyond what has been reported. “We had some stuff stolen a few months back; some electronics and other items," he said. "We provided a list of the stolen items to law enforcement at the time, and we have spoken with them periodically on the status of the case. At this point, we’re waiting to hear whether any of the items that were recovered (at Mayfield’s residence) belonged to us. At this moment, I have no idea.”

Thanks to WSOC-TVs Alan Cavanna for the photo.
Posted by Dave Moody at 10:33 AM