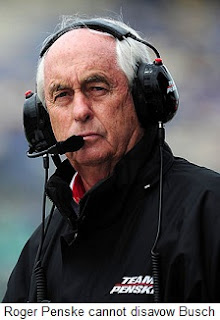 Penske Racing commented today on the actions of driver Kurt Busch toward ESPN pit reporter Dr. Jerry Punch Sunday at Homestead Miami Speedway. Angry with a delay in being put on the air, Busch lobbed multiple obscenities at Punch until the veteran reporter eventually reached the breaking point and walked away, before Busch’s interview could be conducted.

"Penske Racing extends its apologies to Dr. Jerry Punch, our media partners and our sponsors and fans for Kurt Busch's inappropriate actions in Homestead on Sunday,” said a statement from the team. “These actions do not represent Penske Racing and are inconsistent with the company's standards for behavior, respect for others and professionalism. This matter is being reviewed internally with no further comment at this time."

That statement is, in two words, horse manure.

Kurt Busch absolutely does represent Penske Racing, its sponsors and employees. The uniform he wore Sunday included the Penske Racing logo. He drove the #22 Penske Racing Dodge – albeit briefly – and made numerous appearances on behalf of the team and its sponsors throughout Ford Championship Weekend. Roger Penske hired Busch, not long after Jack Roush terminated him in the aftermath of a similar outburst of boorish behavior. Penske has maintained Busch in his employ, despite periodic bouts of unpleasantness, public criticism of his own team, and comments about team management (including Penske) that in the minds of many bordered on outright mutiny. None of those outbursts elicited any sort of public sanction from the team; other than Tuesday’s semi-indignant press release. 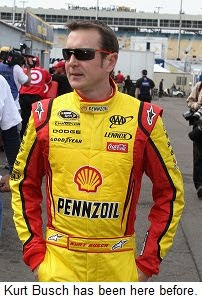 Sorry, Mr. Penske, but you can’t have it both ways. You cannot embrace Kurt Busch as your driver and corporate spokesman for the last six seasons, then conveniently disavow the relationship on the day he he shows his ass to the world. Your failure to sanction Busch for prior bouts of boorishness have sent a consistently poor message, both to him and the sport as a whole. Tuesday’s attempt at hand-washing is just another brick in that wall.

In an effort to determine how it could – and should – be done, compare Busch’s deportment Sunday to that of fellow Sprint Cup Series driver Carl Edwards. Busch exploded like a petulant teenager over a simple, blown transmission. Mechanical failures are an unfortunate -- but not uncommon – part of the sport, and most drivers treat them as such. Hours later, Edwards conducted himself as a gentleman in the aftermath of the most crushing defeat of his racing career, if not his life. There was nothing gentlemanly about Busch’s display, and the only thing adult was his language.

It’s time for Penske Racing to stop sheltering Kurt Busch from his own actions. Jack Roush taught Busch a valuable lesson in late 2005, yanking him from behind the wheel with two races remaining and handing him a pink slip. Busch learned that day that nobody is bigger than the sport, and that even extreme driving talent is not enough to counteract a repeated lack of class, civility and compassion. After six years, that lesson has apparently been forgotten.

Perhaps it’s time for a refresher.
Posted by Dave Moody at 5:13 PM