The charity race, supporting Motor Racing Outreach (MRO) and Speedway Children’s Charities (SCC), will pit the women of NASCAR against each other in Bandolero cars provided by U.S. Legend Cars International on the speedway’s frontstretch quarter-mile oval. 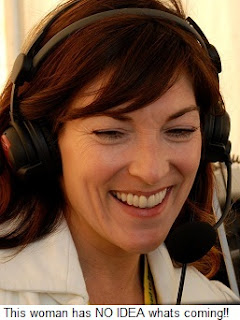 “Matt was pretty excited when he heard I was going to race,” said Katie Kenseth. “This is an exciting event for a great cause and an opportunity for the girls to ‘have at it.’ I think you’ll see most of us are just as competitive as the men. Hopefully the other ladies will have a lot of fun racing for second place.”

The Better Half Dash will start at approximately 2:30 p.m. EDT and will be 25 laps in length, with a competition caution set for Lap 15. There will be two chances at a green-white-checkered finish. Caution laps will not count. Starting order will be determined by random draw prior to the race.

While the better half is toiling away in the driver’s seat, the husbands will have the option to serve as crew chief or spotter for the race. Drivers and crew members are not permitted to make any engine, chassis or suspension modifications. They can, however, give advice.

“I have already started my research into how to drive,” said Angie Skinner. “My husband’s response was, `Let off the gas and turn when you feel you are too tight.' I asked, ‘How much do you let off and for how long?’ He responded, ‘If you knew that, you’d be a professional race car driver!’ Can I have a different ‘other half’ for this race, please?"

The "Better Half Dash" purse will be paid to the competitor's charity of choice, with $5,000 going to the winner’s charity, $3,000 for the second place finisher and $2,000 for third. Fans will also have the opportunity to donate $10 to MRO and SCC through the completion of the Bank of America 500 by texting “MOTOR” to 20222.

“What a great and exciting opportunity to help support and raise money for MRO & SCC,” said Trisha Mears, wife of NASCAR Sprint Cup Series driver Casey Mears. “MRO has been such a huge part of our racing lives and SCC is a very rewarding charity that has helped no many children throughout the years. I’m looking forward to raising money and having fun in the race car. And can someone ask Katie Kenseth if she can drive in reverse?”

“MRO is extremely thankful to partner with Speedway Children's Charities on this event and thankful for the support of Charlotte Motor Speedway and the drivers who are participating,” said Billy Mauldin, president of MRO. “We’re so excited to be a part of this fun event, it’s time to give these ladies the chance to show the guys they know a thing or two about racing."

Two Better Half Dash practice sessions are scheduled for Sept. 26 and 28 at Charlotte Motor Speedway. Updates on the race and entrants can be found at www.charlottemotorspeedway.com.