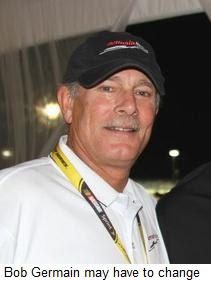 “Toyota has told us they will try to work something out,” said Germain, “but it’s not certain. There is a possibility that we may have to look elsewhere. We had already promised GEICO that we would go with TRD engines next year (after running Triad power in the past), and they were really excited about that. I never thought there would be a problem doing it, but now apparently, there is.”

Germain said he has already spoken to other manufacturers about possible 2012 alliances. “We went out and looked around little bit,” he said. “We talked to Ford Racing and we talked to Rick Hendrick a while back, just to see what’s out there and how their programs work. My hope is still to stay with Toyota, but we may not be able to do so.”
Posted by Dave Moody at 5:41 PM