Stewart May Be Title Worthy, After All

Less than a week ago, Tony Stewart declared himself incapable of winning the 2011 NASCAR Sprint Cup Series championship. Limping into the Chase as the number nine seed; Stewart was one of only two drivers – along with Dale Earnhardt, Jr. – who entered the 10-race Chase without a race win. His typical midsummer surge never materialized, and with only three Top-5 finishes all year, he said publically what many observers had long ago decided; that 2011 was not his year.

Now, both Stewart and his fans may have to change their ways of thinking.

A win in Monday’s rain-delayed GEICO 400 at Chicagoland Speedway put Stewart back on the winning track, snapping a personal 32-race winless streak and catapulting him from ninth to second in the championship standings, just seven back of leader Kevin Harvick. It continued a mini-hot streak that has seen the former Sprint Cup Series champion finish third, seventh and first in his last three starts, and set the stage for what could be one of the most unlikely championship bids in recent history.

“You couldn’t pick a better weekend to get that first win of the year,” admitted Stewart yesterday. “We felt like there were three or four opportunities earlier in the year that we let get away from us, (but) I didn’t honestly know going into the race... that we had a car as good as we needed to win today.” 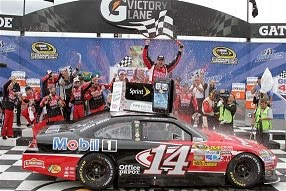 He immediately improved his 26th-place starting spot, slashing a path into the Top-20 before a mandatory, Lap 30 competition caution flag flew. “It didn’t take long to figure out that we were pretty solid,” said Stewart, who kept Kevin Harvick, Matt Kenseth and others at arm’s reach -- while simultaneously conserving fuel -- over the decisive final 50 laps. He led four times for a total of 35 laps en route to the 40th Sprint Cup victory of his career, then insisted that one win does not a title contender make.

“Today doesn’t change my mind,” claimed Stewart after the race. “But the last three weeks definitely make me feel better about it. … We’ve got a long way to go.”

The next step in Stewart’s “long way” to the championship comes at New Hampshire Motor Speedway, where he and Stewart Haas Racing teammate Ryan Newman dominated in mid-July. Newman and Stewart qualified and finished one-two in the “Lenox Industrial Tools 301,” with Newman carrying the checkered flag on what his teammate and employer called “a perfect weekend.”

With a burst of newfound momentum and three consecutive Top-7 finishes in hand, NASCAR’s purest streak shooter finally seems to have found his touch. Past history shows that when Stewart gets on a roll, the checkered flags can come in bunches, and with eight of his fellow Chase competitors stumbling badly at Chicagoland, Stewart’s new hot streak could not come at a better time.
Posted by Dave Moody at 11:08 AM