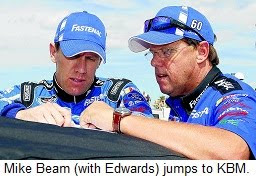 Beam’s resume’ as a NASCAR crew chief dates back to 1981, with stints atop the pit box for a list of drivers that includes Richard and Kyle Petty, Michael Waltrip, Bill Elliott, Sterling Marlin, Elliott Sadler, Ricky Craven, Kenny Wallace and Bobby Hamilton, Jr. He has three career Cup Series wins; two with Elliott and one with Craven. He most recently served as crew chief for Carl Edwards’ #99 NASCAR Nationwide Series effort at Roush Fenway Racing, leading the team to eight victories in 33 starts last season.

Beam revealed that he also considered the vacant Competition Director’s position at Turner Motorsports, overseeing the team’s Nationwide and Camping World Truck Series operations before deciding to sign with KBM. “I won eight races with Carl last year, and I really like that winning part,” said Beam. “This cat (Busch) is going to get it done. It’s going to be hard work, but I really like the look of this deal.”

Beam said no driver has been selected for the KBM’s new Nationwide Series Toyota, adding that he hopes a decision is coming soon. “I think Kyle’s getting close on a driver,” he said. “He’s on vacation this week, but I know they’re working on it. I’m not sure who it’ll be yet, but we need to get some seats ordered pretty soon. It’s tough to get anything done through the holidays, so from my point of view, we need to get busy right now.”
Posted by Dave Moody at 11:38 AM