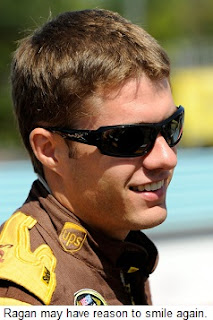 It appears that Kurt Busch's loss may be David Ragan's gain.

Multiple sources tell Sirius-Speedway.com that the former Roush Fenway Racing driver is the leading candidate to replace Kurt Busch at the wheel of Penske Racing's #22 Shell Pennzoil Dodge next season.

One day after the 2011 season finale at Homestead Miami Speedway, team owner Jack Roush said there was less than a 50/50 chance that he would re-sign the Undadilla, Ga., driver, saying, "Right now I don’t see having something for David. We aren’t far enough along. There are some discussions ongoing, but they aren’t far enough along that I would put more than a 40 percent chance of having something for David.”

Ragan’s former sponsor, UPS announced late in the season it will reduce its involvement in 2012, playing an associate’s role on the #99 Ford of NASCAR Sprint Cup Series runner-up Carl Edwards.

Roush still holds an option on Ragan's contract for 2012, but informed the driver recently that he is free to pursue opportunities with other teams. Now, sources say Ragan has emerged as the leading candidate from a field of potential replacements for Busch that includes David Reutimann and Brian Vickers, as well as Penske Racing Nationwide Series drivers Sam Hornish, Jr., and Parker Kligerman.

It is highly unlikely that Penske Racing would have fired Busch without the prior approval of sponsors Shell and Pennzoil, and sources say that decision also would not be made until the team and sponsors had agreed upon a viable replacement.
Posted by Dave Moody at 10:40 PM