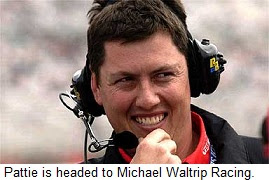 Pattie most recently worked atop the pit box for Juan Pablo Montoya's #42 Target Chevrolet team under the Ganassi Racing banner, and will lead Bowyer's new team at MWR this season. Many of the crew members under his watch will come from Red Bull Racing, which is not expected to return in 2012.

Unofficially, seven over-the-wall crewmembers from Red Bull Racing are expected to work for MWR in 2012. Five of them will crew Bowyer’s #15 Toyota, including the front tire changer, front tire carrier and gas man from Kasey Kahne’s former #4 team, along with the jack man and rear tire changer from Brian Vickers’ No. 83. Two other former Red Bull crewmen will work on MWR’s No. 56 and No. 55 Toyotas. Other former Red Bull team members have found work at JTG Daugherty Racing and Hendrick Motorsports.

Sources with Red Bull Racing said crewmembers were originally forbidden to talk to other teams until the end of their current contract in early December. Red Bull reportedly issued an amendment to that ruling 3-4 weeks ago, allowing crewmen to seek immediate employment in exchange for forfeiting their severance pay if Red Bull closes its doors.

It is expected that Red Bull will releasing the balance of its Competition Department at the end of business today.
Posted by Dave Moody at 1:34 PM