One of the most successful combinations in NASCAR will continue for years to come, as Penske Racing announced today that driver Brad Keselowski and crew chief Paul Wolfe have both agreed to multi-year contract extensions. 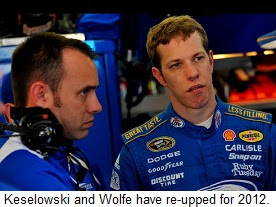 Keselowski and Wolfe will continue to lead the #2 Miller Lite Dodge team as it pursues the NASCAR Sprint Cup championship in 2012 and beyond. "The winning combination of Brad Keselowski and Paul Wolfe has been terrific for Penske Racing and we are excited to announce that they will continue to work together," said team owner Roger Penske. "With one championship and numerous wins in both the Nationwide Series and the Cup Series to their credit, this has proven to be a special pairing. Although Brad, Paul and the #2 team fell short of winning the Cup Series title this season, we know they will continue to be championship contenders for years to come."

In their first season together in 2010, Keselowski and Wolfe teamed to produce six wins and five poles on their way to winning the Nationwide Series championship for Penske Racing. They also established a new series single-season record with 26 top-five finishes and completed all but one lap of competition throughout the 2010 season.

This year, they won three races en route to an impressive fifth-place finish in NASCAR sprint Cup Series points, with a pole, 10 Top-5 and 14 Top-10 finishes
Posted by Dave Moody at 11:43 AM