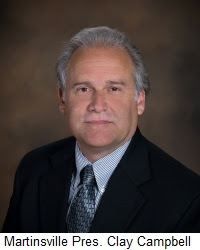 Martinsville Speedway President Clay Campbell could have made an early descent from atop the track's entrance sign Friday afternoon, but he knew the longer he stayed, the more money he raised to help needy children in the Martinsville and Henry County area.

Campbell had vowed to stay perched 38 feet in the air until he raised $20,000 for the Martinsville Speedway Children’s Foundation. That total was hit by mid-afternoon, but Campbell made the decision to stay put as temperatures dropped later in the afternoon.

“It wasn’t nearly as cold as it was last year, so I figured I would stick it out up there as long as I could and help as many children as we can,” said Campbell. “It always amazes me how generous the folks of Martinsville and Henry County and our friends in our racing family are. In today’s economy, to be able to raise this much money in a single day is incredible.”

The temperature hovered just below freezing when Campbell was hoisted to his perch. The temperature rose only into the high 40s during midday, then dropped as the afternoon wore on. The only time he descended during the eight-hour stretch was for a couple of TV and radio interviews.

The Christmas spirit revs up at Martinsville Speedway Saturday with the 15th Annual Martinsville Speedway Toy Drive to help needy youngsters in the Martinsville and Henry County area have a good Christmas. During the Toy Drive, fans will drive their personal vehicles around Martinsville’s famous half-mile oval for a donation of a toy or a $10 cash contribution. Volunteers from the Grace Network will be at the pit gate to collect donations.

For fans wanting to make a little quicker trip around the track, Campbell will give five hot laps in one of Martinsville Speedway’s pace cars for a $25 donation. Participants will receive a certificate of completion from Campbell. Fans will also be able to walk into the infield via the pedestrian tunnel and drop off toys and monetary donations at a table set up close to the infield concession stand.

Martinsville Speedway staff members will be making and selling the Famous Martinsville Speedway Hot Dog and Pepsi products for $1 each, with proceeds going to the Grace Network. The Grace Network, a local group comprised of almost 100 churches, will distribute the collected toys to families in need. The monetary donations from Saturday will be used to purchase additional toys. All of the toys will remain in the Martinsville and Henry County area.

Santa Claus will be making his annual appearance at the track from 11 a.m. until 1 p.m.
Posted by Dave Moody at 5:13 PM