Gene Haas' Gamble Is Set To Pay Off 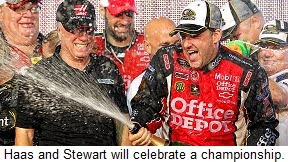 Things hit rock bottom in 2008, when Haas went to prison after a conviction for income tax evasion. While behind bars, he made an unheard-of attempt to raise his struggling operation from the depths of NASCAR futility; offering two-time NASCAR Sprint Cup Series champion Tony Stewart a 50% ownership stake to come and drive his race cars. People questioned Haas’ sanity at the time, saying that no team owner in the history of the sport had ever offered such a colossal signing bonus. When Stewart ultimately accepted the offer, folks questioned Smoke’s mental health, as well.

Just three years later, Gene Haas no longer appears to be in need of psychiatric attention. In fact, he may be the smartest man in the sport. Seven years of futility have given way to 13 Sprint Cup victories in the last three seasons, a breathtaking five-win Chase and Stewart’s third career Sprint Cup Series championship. 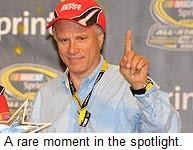 Earlier this year, Haas said he underestimated the difficulty of succeeding at the sport’s highest level. "When we first came to NASCAR, we had high expectations,” he said. “We thought we would be able to run with the big dogs, but it was a lot harder than we thought. Everyone has great equipment, and it was a tough nut to crack.”

Haas said he never truly expected Stewart to leave Joe Gibbs Racing to drive for his unproven, operation. "I thought Tony was a little crazy,” he said. “But he’s smarter than you think.”

Haas gives the credit for Stewart Haas Racing’s unlikely turnaround entirely to his partner, saying Stewart’s connections and relationships allowed the team to hire top-name mechanics and engineers. Chassis, engines and an existing technology partnership with Hendrick Motorsports elevated SHR to the ranks of Chase contenders, and Stewart’s indomitable will behind the wheel did the rest.

Tomorrow night, Gene Haas will sit in the audience at the Wynn Las Vegas, eschewing a place on stage beside his championship-winning partner in favor of a spot in the shadows. While Stewart accept the accolades, Haas will sit alongside more than 160 anonymous team employees he flew to Las Vegas to help celebrate the company’s first-ever NASCAR championship.

Not a bad way for a crazy man to spend the evening.
Posted by Dave Moody at 12:50 PM