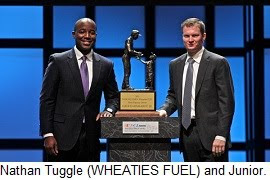 Fans of Dale Earnhardt Jr. have voted the Sprint Cup Series driver NASCAR's NMPA Most Popular Driver for the ninth consecutive year. Earnhardt Jr. earned the award after receiving the most online fan votes among all eligible drivers throughout the 2011 racing season.

The trophy was presented by award sponsor Wheaties FUEL to Earnhardt Jr. at the National Motorsports Press Association's Myers Brothers ceremony yesterday in Las Vegas. Fans cast nearly 1.5 million total votes throughout the 2011 campaign, voting up to once per day for their favorite driver at www.WheatiesFuelMostPopularDriver.com. The field was narrowed to 10 finalists and the vote counts were reset to zero for the final 10 races of the season. The nine other finalists were (in alphabetical order): Kyle Busch, Carl Edwards, Jeff Gordon, Kevin Harvick, Jimmie Johnson, Kasey Kahne, Matt Kenseth, Bobby Labonte and Tony Stewart.

"It's a big honor," said Earnhardt. "My fans have been real supportive throughout my career. This has been a little bit of a turnaround from the last couple of years, and we want to keep getting better on the racetrack and give our fans what they expect. We've got a lot of momentum going into 2012, and I'm proud to accept this award on behalf of all the fans who voted."

"Dale Earnhardt Jr.'s fans showcase the passion NASCAR drivers can instill," said Rea White, president of the National Motorsports Press Association. "The NMPA appreciates all the fans who vote to make this award an important part of NASCAR."

Since 1956, the NASCAR NMPA Most Popular Driver Award has recognized NASCAR's most beloved Sprint Cup driver. The award has been won by champions such as Dale Earnhardt, Bobby Allison, Richard Petty and Darrell Waltrip. It is still the only NASCAR award determined solely by the fans. The contest once was decided by a poll of drivers taken at the end of the season. Later, only the press was able to vote for the winner. Today, race fans from all over the world make the ultimate decision. General Mills became involved with the award in 2001.
Posted by Dave Moody at 1:28 PM