Vote Smoke Onto The SI Cover

For nearly 60 years the cover of Sports Illustrated has defined the story of the day in sports. The magazine's iconic cover always stirs passionate dialog, debate, celebration and criticism; and for those who believe in jinxes, fear. But there has always been one constant. The choice of who appears on the sover of SI has always rested in the hands of the magazine's editorial team.

Today, that all changes.

Beginning at 3:00 p.m. EST, sports fans can visit SI’s Facebook page (www.facebook.com/sportsillustrated) to rank the top five sports moments from 2011 drawn from a selection of 15 images which correspond to the editorial staff’s selections for the best sports moments of 2011. The image receiving the most votes as of December 16, will appear on the cover of the year-end double issue.

“Sports Illustrated has always been an advocate and voice for sports fans,” said Terry McDonell Time Inc. Sports Group Editor. “This is an extension of that mission, letting fans in on one of the most important and discussed decisions of the year.” 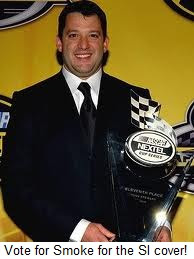 Griffin’s Dunk— February 19: In the 2011 NBA slam dunk contest, the Clippers’ Blake Griffin soars over a Kia sedan to jam home the title

UConn Survives— March 10: Kemba Walker hits a buzzer-beater to defeat Pitt 76-74 in the Big East quarters; the Huskies roll to the NCAA title

Messi and Barça Reign—May 28: Lionel Messi and Barcelona overwhelm Manchester United 3-1 to win the Champions League title and stake a claim as the greatest team ever

Mavs Win— June 12: Dirk Nowitzki and the Mavericks beat LeBron James and the star-studded Heat in Game 6 of the NBA finals for Dallas’s first title

Bruins Hoist the Cup— June 15: Behind a historic performance from goalie Tim Thomas, the Bruins defeat Vancouver to win their first Stanley Cup since 1972

McIlroy Majestic— June 19: After his epic Masters meltdown, Rory McIlroy bounces back to win the U.S. Open in historic fashion

U.S. Women Stun Brazil— July 10: Abby Wambach scores a 122nd-minute equalizer against Brazil in the Women’s World Cup quarterfinals, and the US wins on penalties

Djoker’s Wild— September 10: Novak Djokovic fights off two match points to defeat Roger Federer in five sets in the U.S. Open semis on the way to the title