Kyle Busch is unlikely to compete in the NASCAR Camping World Truck Series in 2012, at the request of Joe Gibbs Racing and their Sprint Cup Series sponsor, M&Ms. 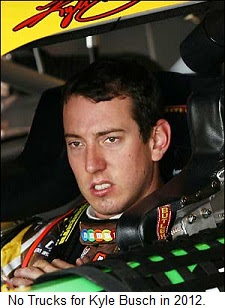 Kyle Busch Motorsports General Manager Rick Ren confirmed today that there is “a high probability” that Busch will withdraw from the 2012 Truck Series. “That topic is being discussed almost constantly around here right now,” he said, adding, “It is not necessarily something that Kyle chose. If he doesn’t run Trucks this year, it will be at the request (of JGR). Not by demand, but by request.”

After winning six races in 16 Truck Series starts last year, Busch was involved in a controversial crash with championship contender Ron Hornaday at Texas Motor Speedway on Nov. 4. He did not take part in the NCWTS season finale at Homestead Miami Speedway, and M&Ms pulled their sponsorship from his JGR Sprint Cup Series entry for the balance of the season.

“Things change on an hour-by-hour basis,” said Ren today, “but if I had to answer you right now, I’d say he will probably not race in the Truck Series next year. There is a possibility of him running no Nationwide races under certain circumstances, as well. There are a lot of things being discussed right now, which makes it pretty tough on me. 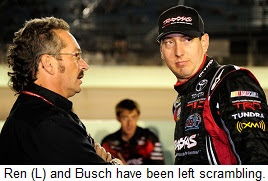 “I’ve been trying to figure out whether Kyle’s going to be available to run our Trucks and Nationwide cars, then determine whether the individual sponsors will stay around without him behind the wheel.” Ren said many of the team’s sponsors came aboard with the understanding that Busch would drive a specified number of races in their entries. Now, with Busch’s participation uncertain at best, many of those negotiations are back to square one.

“I believe Kyle will drive a KBM Nationwide Series Toyota in a certain number of races next year,” said Ren. “I can’t swear to it, but that’s what it looks like today.”
Posted by Dave Moody at 11:41 AM