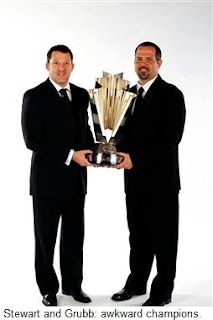 From the beginning of the 2011 NASCAR Champion’s Week festivities, Grubb made the most of his role as the sport’s most unlikely lame duck, celebrating a championship won alongside Tony Stewart and the #14 Office Depot/Mobil 1 team while knowing – as everyone now knows – that he will not be allowed to defend that title. Grubb’s wife, Yolanda, called herself and her husband, “the big elephant in the room" everywhere they went in Las Vegas this week, and the analogy could not have been more apt.

Three weeks after the team confirmed Grubb will not return in 2012, fans still struggle to understand the decision. How can a crew chief who masterminded five Chase victories and one of the most improbable championships in NASCAR history end up losing his job?

While the exact dates continue to be debated, the decision boils down to one word.

Stewart’s Office Depot/Mobil 1 team started the season strong, claiming the championship point lead after the season’s third event at Las Vegas Motor Speedway. They failed to maintain that momentum, however, plummeting to 11th just three weeks later, before spending the remainder of the regular season clinging to (or lurking just outside) the Top-10. Winless in the 26-race regular season, they entered the 2011 Chase no better than ninth, and by Stewart’s own admission were simply “taking up space” among the more legitimate championship contenders. 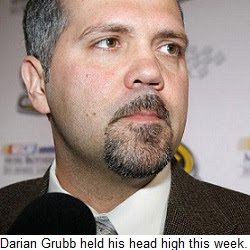 With little reason to expect a change in performance, team management decided that changes needed to be made to the #14 team. “There were a group of us that sat down and had to make a decision,” said Stewart. “The decision was that we needed to go in a different direction. (It) was made before the Chase started, (but) we wanted to finish this thing out strong together. We were going to (stay together) to the end of the year.

"There were a lot of missed opportunities and… variables that we felt needed to be changed," he said. "We decided to make the change, and we stuck with what our decision was."

As the Chase began, Stewart’s season took an unexpected turn for the better. Wins in the first two races of the Chase at Chicagoland and New Hampshire gave the mercurial driver a much-needed burst of adrenaline. That momentum was squandered, however, with finishes of 25th at Dover and 15th in Kansas. As the circuit came home to Charlotte Motor Speedway with the team ninth in points, Stewart made it official, informing Grubb that he would not be retained past the end of the season.

Behind-the-scenes conversations were quickly initiated with Penske Racing crew chief Steve Addington, a proven, championship-caliber pit boss who had cultivated a close relationship with Stewart during the pair’s tenure at Joe Gibbs Racing. Unhappy with his position as crew chief for Kurt Busch’s #22 Shell-Pennzoil Dodge, Addington agreed to join SHR in 2012.

Surprising, insiders say Grubb “loosened up” after being informed of his impending release, obsessing less about strategic decisions and becoming more decisive atop the pit box. Coincidentally or not, Stewart got hot again, racking up Top-10 finishes at Charlotte and Talladega, then making back-to-back visits to Victory Lane at Martinsville and Texas.

A third-place finish at Phoenix International Raceway sent Stewart and Grubb to Homestead Miami Speedway three points behind leader Carl Edwards, setting the stage for a winner-take-all race for the title. A classic battle ensued -- arguably the greatest 400 miles in the history of the sport – and when it was over, Tony Stewart was the 2011 NASCAR Sprint Cup Series Champion.

"I'm very proud of the fact that through it all, (Darian) was able to do a great job and we were able to come out with a championship,” said Stewart afterward. “It's a pretty strong statement. 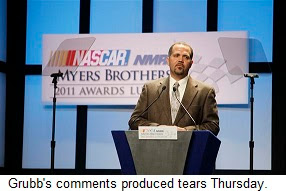 "(But the) wins and the championship don't change some of the variables we were looking at changing," he added. "There are no major flaws with Darian, but there were variables we felt like we needed to change. And we stuck with that."
For his part, Grubb spoke eloquently, honestly and respectfully throughout Champion’s Week, attempting to explain the wildly conflicting emotions that have dogged his championship celebration, every step of the way.

"It's definitely awkward," he admitted, "but we're trying to put that in the back of our head and go out and enjoy what we've accomplished. I think we're doing a good job of that, but it's tough. To win a championship is one of the most special moments of my life. But knowing that it's coming to an end, ...that's a tough thing for me. I've already got my office cleaned out and we're getting ready to move on."

As the championship-winning crew chief, Grubb was asked to speak at this week's Myers Brothers Award luncheon. Understandably, he struggled to maintain his composure while at the podium, delivering a poignant, heart-felt speech that can be viewed by clicking HERE.

He was not alone.

Sprint Cup Series Director John Darby – nobody’s sissy – and a number of others in the crowd were moved to tears by the words of the lame-duck title winner. And when he concluded, no less than championship runner-up Carl Edwards leapt to his feet in applause, triggering a heartfelt standing ovation for one of the most respected and beloved members of the Sprint Cup Series garage.
Posted by Dave Moody at 1:45 PM