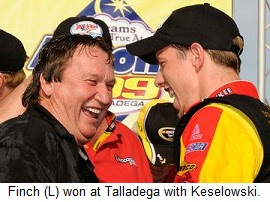 The deal is reportedly for one year, and Finch told Fox Sports he is not worried about reining-in his often controversial driver. “I’ve worked with iron workers, I worked with construction workers, so working with a driver is not going to be a problem,” he said. “All we want to do is win.”

Busch parted company with Penske Racing after a profanity laced tirade directed at ESPN pit reporter Jerry Punch and his camera crew at Homestead Miami Speedway in November. Penske Racing announced yesterday that AJ Allmendinger will replace Busch in the team’s No. 22 Shell Pennzoil Dodge next season. Sources say David Ragan is likely to replace Allmendinger in the No. 43 Richard Petty Motorsports Ford, with an announcement possible as soon as tomorrow.