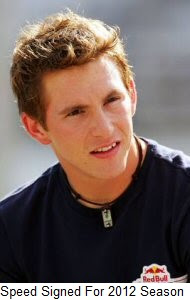 A veteran of all three of NASCAR's premier national touring series, Speed joins Leavine Family Racing after making 13 Sprint Cup starts with Whitney Motorsports in the No. 46 Ford last season. He will be competing in his fifth Sprint Cup Series season, after running full-time with Red Bull Racing in 2010; earning two top-10 finishes and leading 21 laps.

"We are pleased to have Scott Speed join our team," said team owner Bob Leavine. "We, as a team, want to give Scott the equipment and the resources he needs to win - and that is what I believe he will do for us in return. Scott is a proven driver. He was the first American to race in Formula One since Michael Andretti and has a lot to offer our program as a teammate and a competitor."

He began his racing career in arting at the age of 10. Making his way through the open-wheel racing ranks throughout the West Coast, he made his Formula One debut in 2001. From there he has successfully competed in Formula One making 28 career starts before making the transition to stock-car racing in 2007 with the ARCA Racing Series.

The 28-year-old driver is thrilled to have the opportunity to compete with Leavine Family Racing.

"I am excited to team up with Bob Leavine and his guys at Leavine Family Racing," Speed said. They have a solid group of guys working on the team and I think it will be a real fun deal. Our goal is to build this race team to become competitive. We know it will be baby steps, but we are all excited to get it rolling."
Posted by Dave Moody at 11:19 AM