Max Gresham To Truck Series In 2012 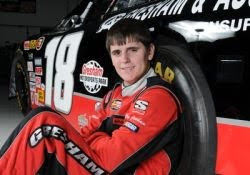 "It's an honor to team up with Joe Denette Motorsports for the 2012 season," said Gresham. "As a rookie, it's going to be a learning year for me. To have Ron Hornaday, Jr. as a teammate and a mentor will be a great opportunity for me. He is an experienced veteran in the series with four championships and more than 50 wins. He will be someone I can lean on for help and guidance to grow as a driver and build a foundation for a successful future. I'm looking forward to getting the season started at Daytona in February."

Gresham, an 18-year-old native of Griffin, GA, captured the 2011 K&N Pro Series East title on the strength of two wins, four poles, nine top-five and 11 top-10 finishes. He was the only driver to complete all 1,705 laps contested in NKNPSE competition last season.

The 2012 season will mark his first full-time stint in the Truck Series. He had three starts in the series at Las Vegas Motor Speedway, Martinsville Speedway and Homestead-Miami Speedway last season. A sponsorship announcement for Max Gresham and the No. 24 JDM entry will be forthcoming.
Posted by Dave Moody at 3:20 PM